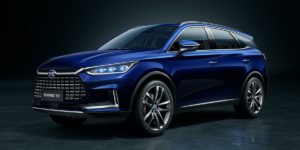 BYD has unveiled the 2021 Tang EV for the Norwegian market. In the new model year, the electric SUV comes as a seven-seater with the ‘Blade Battery’ and a capacity of 86.4 kWh for a range of about 500 kilometres.

The battery of the 2020 model featured an energy content of 82.8 kWh and an NEDC range of 520 kilometres. However, for the 2021 model year, the range of 505 kilometres according to the NEDC is lower than the previous year’s model. This is likely due to the higher weight, as according to the BYD announcement, the Tang EV is now sold to seven-seaters in response to customer requests. Officially, “to maximise the appeal for families.”

The “Blade Battery” is an LFP battery that BYD unveiled in March 2020. According to BYD, the battery is expected to significantly improve space utilisation compared to conventional LFP batteries and be far less prone to fire even after an accident.

However, the company does not provide any information on the vehicle’s charging performance with the new battery in the announcement. So only independent tests will shed light on this. According to BYD, production of the 2021 Tang for the Norwegian market will begin in the second quarter of 2021 and deliveries there in late summer.

In addition to the battery and seats, BYD has adjusted and upgraded the interior. The seats now come in a brown leather finish, and the driver and passenger seats are also heated and ventilated. From the factory, the 2021 Tang EV is expected to have a DAB radio and LTE connectivity, with over-the-air updates to add additional features.

“Although it’s been a challenging time for the passenger car sector,” said Isbrand Ho, managing director of BYD Europe, “we are extremely excited by the very positive reaction to our BYD Tang demonstration programme.” BYD has not provided details on a sales launch of the new model year in other European markets.