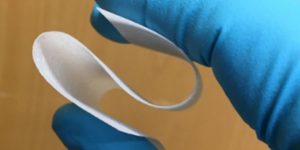 The project is to increase the safety of high-tech batteries further and at the same time extend their service life, the university announced. Battery safety depends crucially on the separators, which ensure spatial separation of the electrodes and prevent a short circuit.

To date, mainly polymer films have been used as separators. Since these can become unstable when overheated, the two electrodes’ clean separation may then no longer be guaranteed. On the other hand, the polymer films are chemically passive. To increase the cells’ energy content, manufacturers are currently trying to reduce the proportion of chemically passive materials and use more chemically active materials. According to the University of Bayreuth, however, this can be problematic if, as with the separator films, safety-relevant components are involved.

The planned glass separators are to become “filigree membranes.” Unlike previous separators, they have excellent temperature resistance of at least 500 degrees Celsius. With their help, it will be possible to increase further the operational reliability of batteries in electric vehicles, laptops, smartphones, and numerous other high-tech applications.”

By way of qualification, the University of Bayreuth states that they can only achieve these advantages if they can produce extremely thin membranes. “Reducing the glass membranes to less than 20 micrometres in thickness is a major manufacturing challenge for us.,” says project manager Thorsten Gerdes. “But it is imperative to ensure that the operational reliability of batteries increases, or is at least maintained if future innovations are to significantly increase their performance – for example, their storage capacity.”

Varta and Tesla (the German government funds both companies as part of the battery project IPCEI) will make their laboratories available for testing. The aim is to test whether the glass membranes developed in Bayreuth actually meet the requirements placed on them.

GlasSeLIB will be funded by the Bavarian Research Foundation with more than 375,000 euros over the next three years.