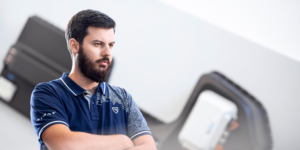 Porsche is increasing its stake in the Croatian electric technology and sports car company Rimac Automobili from 15.5 to 24 per cent. At its most recent meeting, the supervisory board of Porsche AG agreed to invest a further 70 million euros for this purpose.

In mid-2018, the German luxury carmaker first took a ten per cent stake in Rimac and increased its holding to 15.5 per cent a little over a year later. For some time now, there have been rumours of a new increase. The Süddeutsche Zeitung, for example, reported in September that Porsche wanted to increase its share in Rimac to 49 per cent and that the Volkswagen brand Bugatti could be sold to the Croatian electric vehicle manufacturer in return. The newspaper referred to statements by industry insider Georg Kacher. Now it has become clear that the increase in shares will be more moderate and without a brand deal.

Rimac develops and produces electric components, including high-performance drives and battery systems, in addition to which, the company, founded in 2009, manufactures electric supercars. “Rimac is excellently positioned in prototype solutions and small series,” says Lutz Meschke, deputy chairman of the executive board and board member for finance and IT at Porsche AG. He adds that Rimac primarily supports Porsche in the development of components and is well on its way to becoming a primary supplier for Porsche and other manufacturers in the high-tech segment. “Porsche has already placed its first orders with Rimac for the development of highly innovative series components,” says Meschke. He went on to say that both sides will benefit from the even closer cooperation in the future, “Mate Rimac inspires us with his innovative ideas. By the same token, he benefits from our know-how in production and methodological expertise in development.”

Porsche is involved in a number of young companies through its venture capital unit Porsche Ventures. This includes more than 20 start-ups and eight venture capital funds. “Our investment in Rimac has turned out to be absolutely right,” says Lutz Meschke. “The value has increased many times over since our initial investment. The company has developed very well technologically. We are expanding our cooperation step by step and are also benefiting from Rimac’s strength in innovation.”

Company founder Mate Rimac welcomes the German luxury carmaker’s further commitment. “Porsche has been a big supporter of our company since 2018, and it has always been a privilege to have one of the world’s most iconic sports car brands be a part of Rimac,” he says. At the same time, the company, based in Sveta Nedelja near Zagreb, emphasises its independence. Mate Rimac says: “With many car manufacturers across the world being Rimac customers, it is important, both for Rimac and Porsche, that we remain an entirely independent business. The partnership with Porsche helps the company develop and grow which is beneficial for all of our customers.”

Other shareholders include the likes of Hyundai and Kia, who agreed upon a strategic partnership with the Croatian company in 2019 and invested 80 million euros in Rimac in the process. Rimac also signed collaborations with Pininfarina and Seat’s Cupra brand in 2018. The company’s other partners include Aston Martin, Renault and Koenigsegg.

Mate Rimac founded the company that bears his name in 2009 at the age of 21. Before that, as a pupil and student, he had already been tinkering with his vision of the electrically powered super sports car. Today, the company employs almost 1000 people. The Croatian company’s latest in-house development is an electric hypercar called the C Two, which they presented at the 2018 Geneva Motor Show. The two-seater produces a phenomenal 1,408 kW and reaches a top speed of 412 km/h. The electric hypercar manages a range of 650 NEDC kilometres and can be charged to 80 per cent SoC in half an hour with a 250 kW fast-charging system. The C Two was originally scheduled for delivery in 2020 but due to the coronavirus pandemic, can only be delivered to customers this year.