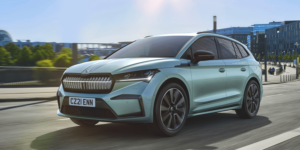 The Skoda Enyaq iV will be available to order in the UK from Wednesday, starting at prices from £31,085 after the plug-in car grant and with a choice of two battery sizes. More models will come in successively.

Skoda already presented the details of the five different performance variants (three with rear-wheel drive and two with four-wheel drive) and three battery sizes of their first MEB-based electric SUV in May. The release of the different versions has not completely been announced, but the rollout will continue steadily. The EV ranges between 340 kilometres (Enyaq 50 iV), and 510 kilometres (Enyaq 80 iV) have not changed much either. Almost all versions have a maximum speed of 160 kph, while only the top model Enyaq RS iV can drive 180 kph. Besides, this version can pull a trailer weighing up to 1,400 kilograms, and a swivelling trailer coupling with an electric release is an option.

Regarding the charging capacities, the vehicle can charge as low as 7 kW on a household socket (AC) and up to 125 kW DC. The Enyaq iV does not include a three-phase onboard charger in the basic version – even the comparable VW model ID.3 Pure only has a two-phase charger with a maximum of 7.2 kW. Skoda has chosen a similar gradation for the DC charging power as VW did for the ID.3: The version with the smallest battery only manages 50 kW, the 58-kWh battery 100 kW and the 77-kWh version manages the maximum specified 125 kW.

The electric SUV was officially presented in September, and at the time, the launch date for the UK was set in early 2021, which the company manage to follow up effectively. At the time, prices were also stated for the UK, starting from £33,450 (before the £3000 PiCG). The founders variant costs almost £50,000, and prices have remained stable. A sportline model version was also introduced a few weeks ago. However, the announcement of when the vehicles will be produced or what they will cost was not made.

Skoda is expanding its Enyaq iV electric SUV line-up as planned in the UK. The latest arrival is a new, all-wheel-drive 80x SportLine model as mentioned above. Priced from £46,610, a £3700 premium over the existing 80 model, the new variant is also the most powerful Enyaq iV to date with an output of 195kW.

Skoda says the model is capable of 303 miles powered by its 82kWh battery. Fast charging at a rate of 125kW is standard, meaning the 80x can charge to 80% in 38 minutes when connected to a 150kW rapid charger.

Compared to previous models, a sports chassis is now standard, with a ride height lowered by 15mm at the front and 10mm at the rear. Skoda says this contributes to a lower centre of gravity and agile handling. LED matrix headlights are also standard.

Buyers in the UK can now order the Skoda Enyaq 80x Sportline, with the first deliveries expected later this year.