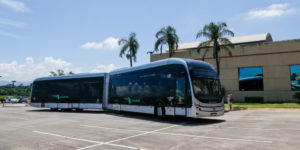 BYD has unveiled its first electric articulated bus produced in Brazil. By October of this year, the manufacturer, together with partner Marcopolo, plans to deliver twelve units for use on Brazil’s first all-electric bus corridor in São José dos Campos.

The e-bus is part of an order BYD received from São José dos Campos in May 2020. Located in the state of São Paulo, the town is set to become the first municipality to benefit from the articulated e-buses made in Brazil. BYD will supply the transport company there with the said twelve units. The city had already leased 30 electric cars from the Chinese manufacturer in mid-2018 (the e5 and e6 models) for use in the police and other government agencies.

BYD expects to deliver the dozen articulated e-buses by October this year but has now made more details available.

The bendy bus, which BYD develops with Marcopolo, Latin America’s largest bus bodies manufacturer, is 22 meters long, has lithium iron phosphate (LiFePO4) batteries, a range of 250 kilometres and space for 168 passengers. The manufacturer does not provide any details on the charging technology. It only says that the charging process takes three hours.

The body of type Attivi Express has been mainly the responsibility of Marcopolo. It is based on an articulated chassis with an integrated electric drive. BYD does not mention any performance data in its announcement but highlights interior features such as upholstered seats with headrests, individual USB ports, installed monitors on the ceiling and full LED headlights. Besides, the traditional rearview mirrors have been replaced with two high-resolution cameras, the company said.

BYD produced the twelve chassis at its plant in Campinas, Brazil – also in the state of São Paulo – and are already at Marcopolo for final assembly, so they are expected to be delivered on time in October.

In the context of the planned e-bus production in Brazil, BYD also commissioned a new lithium iron phosphate battery factory locally last year as reported. The new production facility in Manaus, the capital of the Brazilian state of Amazonas, can manufacture 18,000 LiFePO4 battery modules for electric buses annually.

It is already BYD’s third plant in Brazil and the first factory for lithium iron phosphate batteries in South America. According to the Chinese, they have invested 15 million reals, the equivalent of around 2.28 million euros, in the 5,000-square-meter plant. With the local production of LiFePO4 battery modules, BYD wants to position itself early on in the eMobility market in Brazil and Latin America. The electrification of bus fleets is still a niche market there, but the potential is great, as can be seen from the ZEBRA project.

BYD opened its first plant in Brazil in 2015, and since then, the company has been manufacturing chassis for electric buses in Campinas – as mentioned above. Then, in April 2017, the group inaugurated a manufacturing facility for photovoltaic modules. There have been several local projects since then. For example, BYD handed over nine electric garbage trucks to Rio de Janeiro’s municipal cleaning company in the fall of 2019 and delivered 15 BYD D9W vehicles to São Paulo at the end of 2018. The Chinese are also responsible for two SkyRail projects in the country: In Salvador, this concerns the “VLT do Subúrbio” and in São Paulo the “Line 17 – Gold Line”.