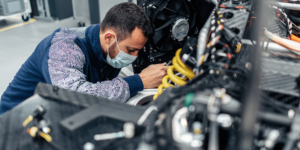 Rimac Automobili, the Croatian company specializing in hi-tech electric vehicles has opened a new research and development office in the UK. It is located at Warwick Enterprise Park and is expected to employ 30 people by the end of this year.

According to the company, the Warwick engineers will work closely with the UK automotive engineers and Rimac’s Croatian headquarters. Rimac also points to already “close ties” to the UK industry as it supplied technology to British brands such as Aston Martin and Jaguar Land Rover. Demand will grow in the future: Jaguar is reportedly becoming a pure e-brand by 2025, while Aston Martin plans to have two EV models by then.

“While we are starting with a small office, we might expand significantly in the years to come, working on Rimac’s future projects,” said Mate Rimac, founder and CEO. The company had also welcomed the UK Minister of State for Trade Policy Greg Hands to its HQ just outside Zagreb just this week.

Rimac may be a small company with about 1,000 employees but plays an important role in the proliferation of 800-volt electric cars. The company supplies its technology to both Porsche (for the Taycan) and Hyundai (for the Ioniq 5) – both automakers have also invested in Rimac.

JLR reportedly plans an 800-volt platform called Electrified Modular Architecture (EMA) for use by both Jaguar and Land Rover. The Aston Martin Rapide E, which was developed to near-production readiness before Aston gave it up, also had a system voltage of 800 volts.

“We firmly believe that British engineers are world-class in the field of electrification and the future of mobility,” CEO Rimac said. He also mentioned expansion “in the near future,” and the company will also unveil its technology flagship C_Two in its production version. The electric sports car can reach up to 412 km/h and is limited to 150 units.