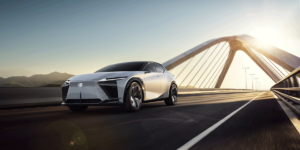 The LF-Z Electrified Concept is a kind of crossover, as the front bonnet of the 4.88-metre-long vehicle is relatively long despite the battery-electric platform, and the front is quite aggressively and dynamically designed in typical Lexus fashion. The study is 1.96 metres wide and 1.60 metres high. The side view is characterised by numerous beads and edges, the roof slopes flat behind the rear seats. The focus is more on dynamic design than on utility.

The 400 kW all-wheel drive is supposed to enable a sprint from 0 to 100 km/h in 3.0 seconds and a top speed of 200 km/h. The LF-Z is also a car with high performance. However, it has been clear since December 2020 that the LF-Z is also about technology and driving characteristics. At that time, the Toyota brand had announced the all-wheel-drive control system “Direct4”, which is used in the LF-Z.

The battery has an energy content of 90 kWh, which according to Lexus, is enough for more than 600 kilometres according to the WLTP standard. The maximum DC charging power is 150 kW. However, Lexus did not specify a charging time, so the charging curve cannot yet be estimated.

Incidentally, the study does without a mechanical steering column; the steering impulses are to be transmitted via “steer by wire”. According to Lexus, this is intended to increase steering precision for the driver and also to filter out unwanted vibrations from the road surface. However, the system is still intended to provide the steering feedback needed for an “active and exhilarating” driving experience.

Lexus plans to introduce 20 new or revised models by 2025, including more than ten electrified models (BEV, PHEV and HEV). By that time, all Lexus models will have electrified variants, which the brand plans to sell more of than their petrol counterparts.

Update 09 June 2021: The LF-Z Electrified Concept BEV presented by Lexus at the end of March is to lead to a production model within the next 14 months. This was announced by the Toyota brand at a press event in Texas.

Like Toyota’s first BEV model, the production version of the Lexus BEV will be based on the e-TNGA modular platform specially developed for battery-electric vehicles. Toyota presented a preview of its future BEV model in April with the bZ4X Concept. Subaru’s first electric SUV Solterra will also use Toyota’s e-TNGA platform or its counterpart e-SGP (e-Subaru Global Platform).

Whether all the announced features of the study, such as the 400 kW drive or the “steer by wire” system, will make it into series production will probably leak out in the coming months. Or it won’t be known until August 2022, when the 14 months now set up are over.

In terms of design, there will reportedly be similarities to the LF-Z, but also numerous tweaks. After all, the concept was presented as a pure design outlook until 2025, not as a near-production study with concrete production intentions.