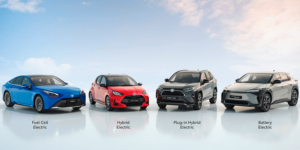 In the course of its plan to become climate-neutral worldwide by the year 2050, Toyota continues to focus on technology openness. The company says it aims to expand the electrified model range to 70 models by 2025, including 15 purely electric vehicles.

It is not only the share of electric cars in the planned 70 models that shows that the Japanese company is focusing strongly on the partially electric drive in the medium term: Sales of hybrids, battery-electric cars and fuel cell vehicles are to rise to 1.5 million units by then and the market share to more than seven per cent. According to Toyota, at least 150,000 vehicles (ten per cent) will be locally emission-free, meaning they have a battery-electric or fuel cell drive. Another 1.2 million (80 per cent) will be hybrid or plug-in hybrid vehicles. This means that the share of electrified vehicles destined for Europe will be at least 90 per cent in 2025, according to the Japanese company.

Toyota does not give details on individual models in the statement, as it is more concerned with the overall picture of the global goal of climate neutrality. In Europe, the company’s hybrid course is likely to be continued and, in future, battery-electric cars – 55 of the electrified models will be offered in Europe, according to the announcement. These will join the new Mirai and potential further FCEVs.

While “some companies” focus on just one solution in this regard, Toyota is relying on different technologies “to get there faster and more comprehensively”. “Toyota is fully committed to the goal of achieving carbon neutrality globally by 2050, and will continue to invest in multiple low-carbon technology and innovation solutions to ensure that we meet the needs of our customers in each country and region,” said James Kuffner, Chief Digital Officer of Toyota Motor Company.

In battery-electric cars, Toyota had recently given a first glimpse of the ‘beyond Zero’ range based on the e-TNGA platform with the bZ4X concept for the future the company is investing in new battery technologies (including solid-state batteries) as well as “increasingly efficient electric motors and improved power electronics”. For fuel cells, Toyota does not specify a focus for future development but emphasises that “awareness of the significant environmental potential of hydrogen” is growing.

Despite electrification, however, internal combustion engines also play an important role on the road to climate neutrality, especially to include the vehicle population. Here, “Hydrogen fuel, as well as other new renewable e-fuel alternatives made from hydrogen and biofuel” are mentioned as research fields on the way to climate neutrality.

“Toyota believes it has a responsibility to ensure that each & every customer has the opportunity to choose the lowest-possible CO2 product on the journey to carbon neutrality – irrespective of market, segment and budget,” Toyota wrote.

Hyundai announces plans to manufacture EVs in the USA