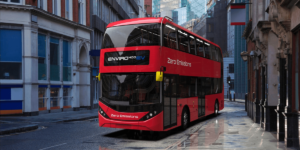 The government hopes the new funding of £120 million (close to €141m) will allow local authorities to deliver up to 500 zero-emission buses while improving air quality and services.

As for the requirements of the new bus strategy, all buses must be sourced in Britain. This is in line with the previously declared goals of “safeguarding the UK bus manufacturing industry”. The government wants to end sales of new diesel buses in the long-run and help cities and regions decarbonise public transport and recover services.

The Financial Times quoted findings from The Campaign for Better Transport that stated 3,000 bus services had been cut over the past decade because of a 40 per cent cut in local authority bus funding. The union Unite, which represents 70,000 bus workers, told the FT, the strategy was an acknowledgement that the 1980s deregulation of buses under Margaret Thatcher’s Tory government was a “complete failure”.

As former Mayor of London, Johnson compared the overall programme to what they did at TFL in the capital. “Just as they did in London, our reforms will make buses the transport of choice, reducing the number of car journeys and improving quality of life for millions,” Johnson said when announcing the 3 billion pound bus scheme.

Desired changes along a London-like service include simpler fares and more routes. They envision daily price caps (which London buses yet need) and integrated services. People could then use the bus as many times a day as they need without facing mounting costs and also change from trains.

To be considered for ZEBRA, bidders have until 21 May 2021 to submit expressions of interest for a fast-track process that will allow local transport authorities with well-developed proposals to move quickly in their bid to secure funding, the UK government suggests.