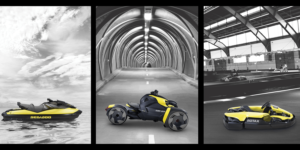 Bombardier Recreational Products (BRP) from Canada announces its decision to offer electric models in all product lines by the end of 2026. BRP is the maker of various Powersports machines, snowmobiles, watercraft, and offroad vehicles.

BRP plans to invest $300 million over five years in product development, specialised equipment, infrastructure, production tooling, and facilities to achieve full electrification. The company expects the first product to arrive in the market within the next two years, followed by “a rapid roll-out across all product lines,” BRP suggests.

“We have always said electrification was not a question of ‘if’ but a question of ‘when,” said José Boisjoli, President and CEO. The company has indeed made several acquisitions pointing in that direction.

The various Powersports models will use technology that the company is currently developing at an R&D facility in Gunskirchen, Austria. The development comes from Rotax, an old Austrian company that is now a subsidiary of BRP. Rotax recently released a snowmobile powered by fuel cells as reported.

The connection to electrification was further strengthened through BRP acquiring Alta Motors’ assets, an electric motorcycle manufacturer from California that commercialized the Rotax Sonic E-Kart, which is currently in operation at the Rotax MAX Dome in the Austrian city of Linz.

Simultaneously, BRP is creating a new Electric Vehicle Development Centre in its hometown of Valcourt in Québec province. This facility will feature “state-of-the-art equipment, including several sophisticated test benches and dynamometers, plus an ultramodern robotized manufacturing cell for electric batteries,” announces BRP.

Kia opens orders for all-electric Kia EV6 in the UK