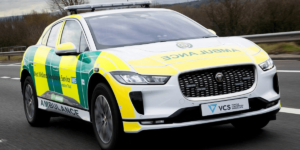 British Vehicle Conversion Specialist, VCS for short, has unveiled an electric car for first responders based on the Jaguar I-Pace. The zero-emission Rapid Response Vehicle (RRV) has been delivered to the West Midlands Ambulance Service and is the second EV in the line of duty.

The two examples of the Jaguar I-Pace RRV delivered to West Midlands Ambulance Service will be put on duty with immediate effect, VCS suggests. The conversion specialist adds the RRVs were “entirely bespoke to their needs, while future vehicles can be tailored to meet other service’s requirements.”

In line with Jaguar, VCS specifies a range of up to 292 miles, the ability to add up to 78 miles of range per 15 minutes when ultra-fast charging (100kW), and a 0-62mph time of 4.8 seconds. The company did not go into specifics regarding emergency response features but state online they were “experts in front-line Accident and Emergency vehicles, Passenger vehicle, and Emergency Response vehicle design and build.”

It is also not the first time VCS delivers a zero-emission solution for emergency services. In 2020, the conversion service launched the E-DCA, an ambulance EV currently being trialled on the front line by West Midlands Ambulance Service.

VCS are not the only ones seeking to electrify emergency vehicles. The Zerro (short for Zero Emission Rapid Response Operations) ambulance that runs on hydrogen is expected to arrive in London later this year as reported, built by Ulemco and partners. Toyota too presented a fuel cell ambulance to trial with the Japanese Red Cross. Nissan also launched a fully electric ambulance last May in Japan. The Nissan EV Ambulance is based on the company’s NV400 van and was developed as part of the ‘Zero Emission Tokyo’ initiative. Back on the continent, Volvo and Rosenberg presented the first all-electric fire engine based on Volvo’s FL Electric last October. The new truck allows flexible use, says Rosenbauer, not “only” firefighting.

Alstom to construct hydrogen trains for four regions in France