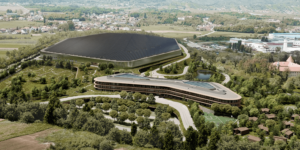 The company plans to employ over 2,500 people at the Rimac Campus, which will cover an area of around 200,000 square metres (100,000 of which will be built on). Development, administration and production will be combined at the new headquarters.

The facility consists of two large and futuristically designed buildings; one for office space and one for manufacturing. The campus is to be built in a natural environment in Kerestinec on the outskirts of Zagreb, while also preserving the character of the area with large green spaces. The Croatian architectural firm 3LHD has also planned elements such as relaxation lounges for the employees and even farmland where organic food will be grown.

In addition to the assembly line for the expensive electric sports cars for Rimac, a production facility for batteries is also to be built in the factory hall. However, there are no details on this yet. A test track is also planned on the site. Construction work on the 200-million-euro facility is scheduled to begin this year, and climate-neutral production will then start two years later, as mentioned.

“The campus is our springboard for the growth plans we have for the next ten years and beyond,” says company founder and CEO Mate Rimac. “It strengthens us as a niche hypercar manufacturer, a leading Tier 1 provider of electric performance technology to the world’s largest automakers, and a pioneer in autonomy and autonomous mobility.” In addition to its own hypercars, Rimac also develops 800-volt charging solutions for other carmakers.

Customers and shareholders include Porsche and Hyundai. These are also the carmakers that already have an 800-volt electric car on the market or will bring one later this year. Porsche had only increased its stake in Rimac to 24 per cent in March. Also in March, Rimac announced the opening of a development office in the UK to better serve customers on the island: Jaguar Land Rover and Aston Martin are also working on 800-volt platforms.