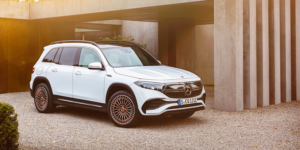 Mercedes has just presented its second compact electric SUV, the EQB, at Auto China in Shanghai. Despite similar technology, Mercedes’ new electric car promises to be more than just an angular version of the EQA. The German carmaker even ascribes the five-or seven-seater the “qualities of a compact estate car”.

In short, the EQB is to the GLB what the EQA is to the GLA: an electric offshoot, but one that is more than just an emission-free drive system in what would otherwise be a typical combustion engine model. The EQB uses Daimler’s modular technology for compact models and inherits the GLB’s long wheelbase of 2.83 metres. The EQA contributes most, but not all of the drive technology.

While the EQA was presented at the beginning of the year as the EQA 250 with a 140 kW engine at the front axle, in Shanghai, Mercedes rolled the EQB onto the stage as the 350 4MATIC – i.e. with all-wheel drive. This has an output of 215 kW. The battery has an energy content of 66.5 kWh, the same as in the EQA. The WLTP consumption is 19.2 kWh/100km, the WLTP range is 419 kilometres, which is seven kilometres less than the smaller EQA.

In China, the Beijing-built version of the EQB will initially be launched as the fully equipped top model ‘AMG Line’. Daimler says that in Europe customers will have the choice between several models with front-wheel and all-wheel drive and various power levels, some with over 200 kW. In other words, there will probably be at least an EQB 250 (with the aforementioned 140 kW) and the EQB 350 4MATIC. A “particularly long-range” version is also planned. Since Daimler says that the battery content is “from” 66.5 kWh, it’s likely that a long-range version will have more than 70 kWh.

An 11 kW AC charger is fitted at the factory, but Mercedes does not reveal further details on charging time, since they say, this depends on “the available infrastructure and the country-specific vehicle equipment”. To try and make an estimate based on other models, for the EQA with this kind of battery, a charging time of 5:45 hours was mentioned from 10 to 100 per cent. With the maximum DC charging power of 100 kW, Mercedes quotes a charging time of 30 minutes from 10 to 80 per cent. It is still unclear whether the variant with a larger battery will also have a higher DC charging power.

Let’s move on to the most obvious feature of the EQB: the body. Here it differs clearly from the EQA, which is supposed to be more of a compact lifestyle vehicle. As with the GLB, the angular EQB is designed to impress with its space and utility. With a length of 4.68 metres, it towers over a VW ID.4 by an impressive ten centimetres; even a Skoda Enyaq is three centimetres shorter. The EQA, on the other hand, is only 4.46 metres long.

Mercedes uses the additional length inside and out with the very late sloping, angular rear that allows for two additional seats. In Europe, this can be arranged on request (in China ex-works). Two additional passengers up to 1.65 metres tall can ride on these individual seats, where child seats can also be fitted. The five-seater has a boot capacity of 495 to 1,710 litres, the seven-seater 465 to 1,620 litres. The seven-seater, however, does not have a continuous loading area, there is a gap between the folded backrests of seat rows two and three. Mercedes describes the EQB as having the “qualities of a compact estate”.

The backrests of the seats in the second row can be adjusted in several stages as standard, and on request, this row can be shifted 140 millimetres in length. This allows the luggage compartment to be enlarged in various steps by up to 190 litres for versatile use. This would increase the load volume to 685 litres, which would clearly surpass the Skoda Enyaq (585 litres). However, only practical tests will show how much of the “comfortable” knee room in row two will then remain.

In terms of design, the EQB follows the basic angular shape of the GLB, but also adopts some design elements from Mercedes’ EQ electric cars. The company refers to this as “electric design aesthetics with corners and edges”. The most striking changes to the GLB are the EQ-typical closed “black panel” grille and LED headlights at the front, the EQ rims (up to 20 inches) and also the continuous light strip at the rear. Inspired by the GLB are some elements of black plastic and aluminium optics on the bumpers. With a cW value of 0.28 and a frontal area of 2.53 square metres, the EQB is not particularly streamlined.

The standard equipment includes navigation with ‘Electric Intelligence’ that calculates the fastest route to the destination, including any charging stops that may be necessary. Before planned charging stops, the battery is brought to the optimal charging temperature. There is also an ‘ECO Assistant’ with situation-optimised recuperation. It incorporates navigation data, traffic sign recognition and information from the vehicle sensors into its efficiency strategy.

Depending on the equipment, the interior features rose gold-coloured decorative elements on the air vents, seats and the vehicle key. The electric car-specific displays also pick up on the rose gold and electric colour blue.

The EQB is not built with the GLB and EQA in the German compact car plant in Rastatt, but in the Hungarian Mercedes-Benz plant in Kecskemét, while only the China-specific version is built by the joint venture BBAC in Beijing. The remaining markets, including the USA from 2022, will be served from Hungary. The batteries are assembled in Kamenz or Jawor, Poland.

Mercedes has not yet announced prices for the EQB at the premiere; these will probably only be published at the start of ordering. The prices are likely to be higher than those of the EQA, which starts as the EQA 250 at 47,540.50 euros before the subsidies.