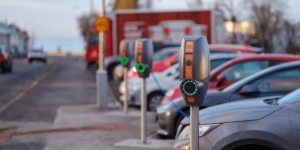 EVBox Group is cooperating with Icelandic utility ON Power to build charging infrastructure in Iceland. The duo has already installed 136 public EVBox charging points at 28 locations in and around the capital Reykjavik. Another 84 charging points are to follow in the coming months.

According to the photos in an accompanying press release, the devices are AC chargers with two EVBox BusinessLine charging points each. The pictures show the ‘Double Socket’ version without attached charging cables.

EVBox and ON Power explain their charging infrastructure offensive around Reykjavik by pointing out that Iceland has the second most electric vehicles per capita. The Icelandic government already announced a climate strategy in 2018 to make the island state CO2-neutral by 2040. The strategy consists of a comprehensive package of measures, including a ban on new registrations of cars with combustion engines from 2030.

ON Power generates and sells electricity in Iceland mainly from geothermal resources. By working with EVBox, the utility can now offer charging solutions for the public sector in Iceland in addition to commercial charging solutions. Berglind Ran Olafsdottir, CEO of ON Power says that EV adoption is particularly high among those who have the option to charge at their own property. “EVBox Group helps us provide charging options for those who don’t have that privilege,” she says

The Dutch group announced just a few months ago that it would go public on the New York Stock Exchange through a merger with investment firm TPG Pace Beneficial Finance. The expected funds are to be used to expand the global business with a focus on Europe and North America and to expand the technology portfolio. In February, the Dutch company announced that it had entered into a sales and service partnership with TSG Group from France. The service provider will offer EVBox charging solutions including installation and on-site services in 30 European countries. The cooperation already exists in the Netherlands, France, Denmark and Croatia.

Wallbox plans a production site in the US