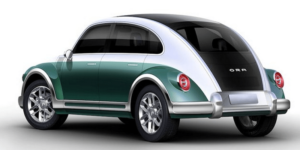 An electric car in the style of the VW Beetle has now been presented at the Shanghai Motor Show. The Beetle-like vehicle does not come from VW, but from Ora, a brand from the Chinese manufacturer Great Wall Motors.

The model name Punk Cat comes from an internet survey, and considering the brand’s last EV is named ‘Good Cat‘, perhaps not much leeway was given in the online naming competition.

Great Wall Motors launched the subsidiary in 2018, which has released four models in the meantime; The R1 Black Cat is partly based on the Smart ForFour and partly Honda E, showing the willingness of the manufacturer to take inspiration from other automobiles. The ‘Cat’ naming scheme persists for the ‘White Cat’.

In technical terms, not much is known about the vehicle. The manufacturer asserted that the driving experience is quite nostalgic, but data regarding the battery or electric drive system are unknown.

Around three months after the presentation of the Ora Punk Cat, the design dispute with VW is likely to enter the next round. VW has already considered legal action against the Beetle clone, which is likely to become concrete soon, because Great Wall has now filed a patent application for the Punk Cat and another Beetle-style design called Ballet Cat – and not only in China but also in Europe. The Registered Community Designs – known in German as Geschmacksmuster (literally translated “taste pattern”) – were approved by the European Union Intellectual Property Office (EU IPO) in June, according to a report by Carscoops.

Both design patents resemble the original Beetle more than the new editions VW itself has built in the meantime. The headlights and taillights, in particular, look very similar to the original from the 1960ies. However, there is one major difference to Volkswagen’s iconic car design from 1938 (apart from the electric drive), and that is that both Ora models are five-door models.

Volkswagen could take legal action to determine whether this is a sufficient differentiating factor. However, the German carmaking giant has not reacted to the design patents.

It looks like Volkswagen needs to hurry if it really wants to file a lawsuit because Great Wall is moving its Beetle clon ahead and has already gotten the approval of the Chinese authorities. The MIIT just approved the production of the Ora Punk Cat in the “original” design.

The copy cat, sorry, Punk Cat remains reminiscent of the VW classic. Only new data has emerged: The Ora Punk Cat measures 4.75 metres and has a 220 kW electric motor powered by an LFP battery from CATL.

Meanwhile, at VW, plans to release an actual Beetle EV as ID Beetle haven’t moved forward. Volkswagen Group CEO Herbert Diess did mention it on Reddit in February, but confirmation has yet to come through.