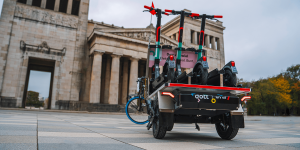 Dutch micromobility company Dott has signed an $85 million Series B funding round. The company operates a fleet of 30,000 electric scooters in five European countries.

The $85m investment (around €70m) will be used to launch new micromobility vehicles to European cities, starting with e-bikes in summer 2021. Dott also plans to expand to new cities and countries, for example in Spain and the UK.

Dott is a young and rapidly expanding company. Founded in October 2018, Dott has become one of the leading micromobility players in Europe. In summer last year, Dott was awarded one of the most sought after contracts in Europe. In Paris – under the mayor Anne Hidalgo famous and re-elected for her vision for sustainable transport and greening of public space – Lime, Tier and Dott were granted permission to operate in the lucrative emergent Paris micromobility market, while all other operators had to pack up and go.

“We’ve shown in the first two years that we can offer a great service for users, good for the planet and good for European cities,” said Henri Moissinac, CEO, and co-founder, Dott. “We think we have a winning formula now, combining operational excellence, hardware & software expertise, collaboration with city stakeholders and capital efficiency. ”.

The Series B funding round was led by Sofina, a Belgium-based investment company, and co-led by Estari, a growth equity investor in European sustainability technology leaders.

Harold Boël, CEO at Sofina said: “We are confident about our future partnership with Dott. We were impressed by the management and look forward to helping the company shaping the future of urban transportation, in a context where it is clear that conventional urban mobility cannot be sustained.”