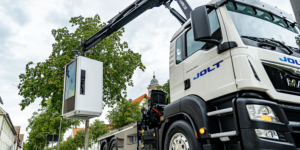 Under the agreement, Jolt will manufacture the charging stations and operate the network, while AECOM will develop and execute an international rollout plan that includes programme management, site development, equipment deployment, commissioning and on-site service. Jolt plans to install up to 15,000 chargers in 250 urban centres by 2025, equally divided between Europe and North America. Individual cities have not yet been named.

The battery is supposed to enable either stand-alone operation completely without a grid connection. When connected to the low voltage, the storage unit serves as the basis for fast charging. It is continuously charged via the grid and delivers the high charging power in a very short time when needed. This enables high-performance charging despite low voltage and without grid expansion. If the connection is made to medium voltage, the stations can be used directly as DC chargers as a third option.

The companies are not yet saying exactly how the 15,000 Merlin columns will be deployed in the 250 cities. However, buffer storage will play an important role, according to a statement by Jeff Woodward, Global Market Sector Leader – Next Generation Energy at AECOM. The aim is to use Jolt’s fast-charging solutions “efficiently and effectively, with less impact on local power grids”, says Woodward.

It was only in February that Jolt Energy, a European charging infrastructure company based in Munich and Dublin, announced its expansion into the US. This also involved a partnership with former New York Governor George E. Pataki and his Pataki Cahill Group. This partnership is no longer mentioned in the AECOM cooperation announcement. Even in the Jolt Energy’s February announcement, the goal was to establish fast charging in US inner cities.