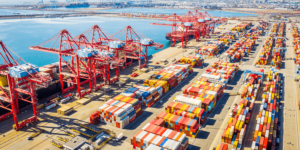 Electrify America is releasing the third instalment of payments for e-mobility initiatives in California. The 200 million dollars are part of an 800-million contribution the Volkswagen subsidiary was ordered to pay following the diesel scandal over emission fraud.

The latest round is second to last in a series of four payments over ten years. The now announced $200 million would go into California Zero Emission Vehicle infrastructure and education programmes over the next 30 months, Electrify America says.

The Volkswagen subsidiary will direct $25 million of the investment for a ‘Green City’ scheme in the City of Long Beach and the Wilmington neighbourhood of Los Angeles, focusing on charging stations for electric transit buses and trucks. The area is home to the nation’s busiest port complex and served by a fleet of more than 18,000 drayage trucks. The Ports of Los Angeles and Long Beach are claiming cargo records for the last seven months, with shipping volumes up 46 and 43 per cent, respectively, year-over-year. Electrify America will focus resources on regional shipping and help encourage the electrification of equipment and vehicles.

What is more, the new programme fits into CARB’s zero-emission truck mandate, approved in June 2020, and CARB’s Innovative Clean Transit Regulation, adopted in 2018. Working with that framework, Electrify America says it recognized the “strong need for transit and heavy-duty truck charging solutions” as part of this investment.

Electrify America has made $400 million in payments in California over the last five years. As before, the incoming instalment will distribute the $200 million across three main categories: Infrastructure; Public Education, Awareness, Access & Marketing; and Green Cities, also Sacramento. Additionally, Electrify America says it will strive to ensure that 35 per cent of the investment is in low-income and disadvantaged communities. The latter is also in line with the California Air Resources Board (CARB), which ordered Electrify America early to include disadvantaged communities in the roll-outs. CARB must approve any investment plan under the 800-million-dollar payment. In the Green City plan in the LA neighbourhoods, Electrify America is also working closely with local authorities.

What started as a penalty is beginning to prove a success for the Volkswagen company that claims, by now, 90 per cent of Californians would live within 15 miles of an Electrify America ultra-fast charger, with 96 per cent living within 25 miles.

Across the US, Electrify America is investing $2 billion over ten years in Zero Emission Vehicle infrastructure, education and access. The company expects to install about 800 charging stations with about 3,500 DC fast chargers by December 2021. During this period, the company says it will expand to 29 metros and 45 states.