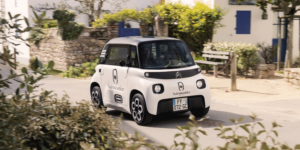 Citroën has introduced a cargo variant of its super low-cost Ami light electric vehicle for delivery services and other urban uses. In the new model variant called My Ami Cargo, the passenger seat has been replaced by a modular cargo box that offers 260 litres of storage space.

The box is designed to help secure the load. However, as it only extends to the bottom edge of the windows – so as not to obscure the driver’s view – its usability is somewhat limited. In a photo published by Citroën, a larger package is placed in what used to be the footwell, taking up more than half of the load space. For the delivery service to transport a larger number of parcels (and make the delivery trip worthwhile at all), they should be smaller parcels rather than one large parcel.

The lid of the storage box can also be used as a kind of shelf or desk. It can fold the freight documents, brochures or a tablet in a recess the size of a DIN A4 sheet. The French company state the load capacity of the lid at 40 kilograms. If somewhat higher objects are transported, the lid can also be removed and stowed behind the seat.

In the rear area of the My Ami Cargo, there is supposed to be another closed storage box in which smaller items such as sunglasses or a smartphone can be safely stowed. All in all, the miniature BEV is supposed to have a useful volume of 400 litres and a payload of 140 kilos.

Nothing was changed in the drive compared to the two-seater specs previously revealed: the 5.5 kWh battery is supposed to be enough for 75 kilometres, charging is done at a 220-volt household socket. The 6 kW motor accelerates the 2.41 metre long My Ami Cargo to a maximum of 45 km/h. The vehicle is 1.39 metres wide. The vehicle is 1.39 metres wide and 1.52 metres high. The turning circle is 7.20 metres.

With the My Ami Cargo, Citroën does not want to compete against larger (electric) vans but rather against two- or multi-wheeled cargo e-bikes. The My Ami Cargo offers “better protection than a two- or three-wheeler” and proves to be more agile than a higher segment LCV vehicle thanks to “its ultra-compact shape and ease of handling”.

“It’s a vehicle that provides a concrete solution for last-mile delivery, particularly of small packages, the volume of which has increased exponentially in recent months,” says Laurence Hansen, Director of Citroën Strategy and Product. “My Ami Cargo represents a true business potential, as the first promising contacts made with a variety of commercial partners have confirmed.”

Sales of My Ami Cargo will start in France in June with prices starting from 6,490 euros gross (including the subsidy of 900 euros there) or on lease from 24.18 euros per month.

When we tested the little friend (Ami is French for friend), we found the mini EV to prove a usable vehicle and one that earns any driver a lot of very broad smiles.