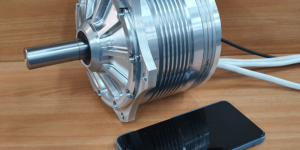 EVR Motors presents an electric motor based on a new patented architecture. It is supposed to be less than half the size of conventional radial flux motors with similar performance and tens of percent lighter. The Israeli company is aiming for series production this year.

The start-up calls the technology of the electric motor “Trapezoidal Stator Radial Flux (TSRF)”,, i.e. a permanently excited machine with 3D trapezoidal teeth and windings that “generates an increased magnetic flux and reduces the stray flux”, according to the developer’s website. Combined with improved cooling and copper utilisation, more power can be generated with this smaller, lighter motor, it says. It is also said to have comparatively low production costs.

“We managed to improve the basic design of the electric motor, which has remained much the same for the last several decades while maintaining the traditional advantages of radial flux motor,” says Opher Doron, CEO of EVR Motors. The TSRF solution is suitable for battery-electric and hybrid-electric vehicles, among others, and to support voltages between 48 and 800 volts. The motor can also be modified in terms of cooling (air or liquid), wire type, coil configuration and magnet type and size.

EVR says it is currently in international talks with various OEMs, suppliers and other customers about demonstration projects and customised motor variants. The start-up aims to have its new development ready for series production by the end of the year. Recent tests on an air-cooled prototype for two- and three-wheeled electric vehicles have shown a peak power of 17 kW and a torque of 40 Nm with a volume of 2 litres and a weight of only 9 kilograms, the Israelis say. Other versions of the motor are to be tested in the coming months, including variants with different voltages, liquid-cooled versions and versions based on ferrite magnets instead of neodymium, i.e. without rare earths.

In principle, EVR believes that its new motor architecture is also suitable for passenger cars and commercial vehicles. According to a press release sent to us by e-mail, correspondingly larger motors are currently being developed. The TSRF solution can be adapted “to most mobility and industrial applications”. The company plans to present the new electric motor on 19 May during the virtual EcoMotion Week 2021, among other events.

EVR Motors was founded in 2012 and has since been able to collect investments amounting to 5.5 million US dollars, according to its own statements. The company employs around 20 people and is led by CEO Opher Doron, who previously worked at Israel Aerospace Industries (IAI). The company’s chairman is Ophir Shoham, former director of defence research and development at the Israeli Ministry of Defence (MAFAT).

New 500 drive review: The little e-car that could mark 300km

Ree to cooperate with AAM for new electric drive system