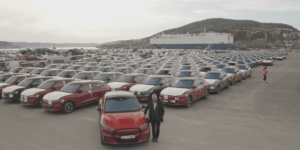 Ford has started deliveries of the Mustang Mach-E in Europe, specifically in Norway. A larger shipment of the electric vehicle model has arrived in Norway and the first vehicles have been handed over to customers there.

A number of demonstration vehicles had already arrived in Norway at the end of 2020, but since the beginning of the year only a double-digit number of vehicles have been registered by the Mustang Mach-E in Norway. Recent images now show a significantly larger number of Mustang Mach-Es that have reportedly been unloaded in Norway and are now being prepared for delivery to customers. Further pictures show the first handovers of the vehicles to customers.

As  InsideEVs reports, without naming sources, 4,000 Mustang Mach-E are to be delivered in Norway in May and June. This could make the electric SUV one of (or even the) best-selling car in Norway.

In April, the VW ID.4 was ahead with 1,824 vehicles. In the current year, the electric SUV from Zwickau comes to 2,684 new registrations in Norway, followed by the Tesla Model 3 (2,570 vehicles) and the Audi e-tron (2,450 units). Only the Toyota RAV4 and Volvo XC40 have higher figures, but these are not pure BEV registrations.

The start of deliveries in Norway with the alleged 4,000 vehicles shipped may also be the reason why sales of the Mustang Mach-E in the USA fell in April. Ford’s E-SUV sold 1,951 vehicles in the US last month, significantly less than in February and March, when more than 3,000 vehicles were sold per month. Moreover, according to Ford, the production volume was 6,155 units in April – the difference with US sales is quite close to the number of vehicles that the report says is destined for Norway.