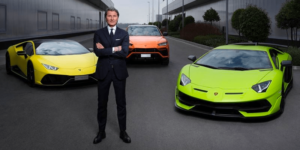 The Italian car manufacturer Lamborghini, which belongs to the Volkswagen Group, has published its electrification strategy. According to the strategy, Lamborghini will launch its first series-production model with hybrid drive in 2023 and hybridise its entire product range by the end of 2024.

Specifically, this means plug-in hybrid drives for the existing Urus, Huracan and Aventador models or their successors. The Urus is an SUV that shares its core platform with the Audi Q7/Q8 and Porsche Cayenne. The Huracan and Aventador are Lamborghini’s current mid-level sports cars with ten and twelve-cylinder petrol engines respectively.

The new Lamborghini CEO Stefan Winkelmann has set an internal target for the “Direzione Cor Tauri” strategy that the products should emit 50 per cent less CO2 by the beginning of 2025. Given the performance class of Lamborghini vehicles, this should only be possible with comprehensive hybridisation. In addition, the Sant’Agata Bolognese site is to become CO2-neutral as part of the company’s largest single investment (1.5 billion euros over four years).

It will take some time before a fully electric Lamborghini is available: The “vision”, or concept of a fourth model is to be presented in the second half of the decade. When a production version of the electric Lamborghini could hit the road is left open by the sports car manufacturer. The brand had already shown an electric concept in 2017 with the Terzo Millennio, but the vehicle did not go into series production. The announced plug-in hybrid of the Urus also never came.

“Lamborghini’s electrification plan is a newly-plotted course, necessary in the context of a radically-changing world, where we want to make our contribution by continuing to reduce environmental impact through concrete projects,” said Winkelmann, who was Lamborghini’s chief executive from 2005 to 2016. “Lamborghini has always been synonymous with preeminent technological expertise in building engines boasting extraordinary performance: this commitment will continue as an absolute priority of our innovation trajectory.”

The strategy, named after the brightest star in the Taurus constellation in reference to the Taurus logo, is to comprise three phases. 2021 and 2022 are to “celebrate the internal combustion engine”, “by presenting models paying tribute to the company’s recent period of continuous success”. Thus, two new V12 models are to come.

The “hybrid transition” will then give all of the Italian’s models a partially electric powertrain by the end of 2024. “Performance and the authentic Lamborghini driving experience remain the focus of the company’s engineers and technicians as they develop new technology,” Lamborghini says. The use of carbon fibre is expected to reduce weight. But it could also be more than a transition: According to the German publication Handelsblatt, Winkelmann no longer wants to sell pure combustion engines from 2025 on, but only plug-in hybrids.

As Winkelmann emphasises, according to the article, the decision on this was not made at the parent company Audi in Ingolstadt – officially Lamborghini is assigned to Audi in the VW Group – but at Lamborghini itself. “Either you manoeuvre yourself out of the market by doing nothing,” the newspaper quotes the Lamborghini and Bugatti CEO as saying, “or by doing the wrong thing.” Lamborghini’s announcement does not include such statements.

The third phase is to be followed by the first all-electric Lamborghini. Here, the Italians remain vague on the details, but confirm that the electric car will be established as a fourth model series alongside the SUV and the two PHEV sports cars.