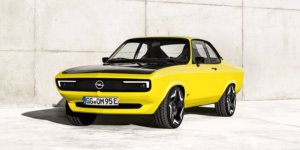 Following the first teaser in March, Opel now shows its Manta GSe ElektroMOD electric study in full. The German carmaker now gives technical data that deviates from the 100 kW drive of the new cars from the retrofit solution.

The electric motor’s power is to be 108 kW, with a maximum torque of 255 Nm. The 31 kWh battery should be enough for a range of “around” 200 kilometres. Charging will be possible exclusively via alternating current: according to Opel, the onboard charger has an output of 9 kW and enables charging with single- or three-phase alternating current.

Interestingly, the Manta GSe ElektroMOD has a manual transmission while the driving power comes from the rear wheels. The electric motor itself is mounted under the black-painted hood instead of the old four-cylinder. This makes the 2021 electric Manta (according to Opel, the “e” in GSe now stands for “electrification instead of fuel injection” ) the most powerful Manta Opel claims to have built ex-factory  – in 1975, the Manta GT/E was the most powerful model with 77 kW. The limitation “ex-works” might be important here. The active Manta fan scene might well have produced more powerful vehicles.

Regarding the manual transmission, Opel says: “Now the pilot has the choice of shifting the original four-speed transmission by hand or simply engaging fourth gear and then driving automatically.” The 255 Nm of torque is said to be available from a standstill in a typical electric fashion.

Incidentally, the range of “around” 200 kilometres is not developed according to the WLTP standard. Since the Manta GSe ElektroMOD is a one-off, the vehicle is not certified.

But it is not only the powertrain that has been modernized in the course of the conversion: visually, the E-Manta is based on the new brand face of Opel. The front is dominated by the ‘Opel Vizor’ across the entire width of the vehicle. Strictly speaking, the one-off is the ‘Opel Pixel Vizor’, which can also communicate with the environment via an LED screen. The latest technology has also been installed in the interior with two screens (twelve and ten inches in size).

The one-off may not go into series production in this form. In March this year, Opel published a teaser image and a short announcement on the Manta GSe ElektroMOD, but without showing the whole vehicle or even giving any data on the electric drive system. A short while later, in an interview in May, Lohscheller said that “in his wildest dreams” he had not expected the feedback to be “so overwhelming”.

Lohscheller now promises, “We’ll be unveiling the car properly soon. We will certainly run it through market research,” Lohscheller said. “And then we will answer the question: New Manta, yes or no?”

Including reporting by Sebastian Schaal, Germany

Texas-built Model Y to be fitted with 4680 battery cells