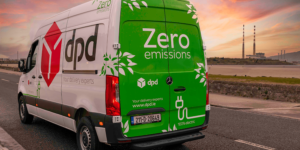 DPD has announced plans to invest a further two million euros in decarbonizing its Irish fleet, with the aim of procuring 100 additional electric vehicles by the end of next year. DPD Ireland has already put 30 new electric delivery vans into service this year.

To operate the 100 electric vehicles to be purchased over the next 18 months, the company plans to equip ten depots with charging infrastructure, electrifying 250 short- and medium-haul routes. By 2023, the operation of all of the company’s depots in the country is to be completely converted to renewable energy.

The sum of two million euros will not only be spent on purely electric delivery vehicles. The company’s sustainability manager James Atkinson says that DPD Ireland also understands decarbonization measures to include route optimisation and the addition of Compressed Natural Gas (CNG) powered trucks to the fleet.

In their press release, DPD Ireland has not said which electric vehicles will be purchased. A press photo shows a Mercedes eSprinter in DPD design. In the UK, DPD uses the Nissan e-NV200 and the MAN eTGE, among others.

Last year, DPD Ireland piloted its “Green Last Mile” initiative to deliver up to 1,000 parcels a day in Bettystown, Laytown and Drogheda. By means of a smart hub-and-spoke model, DPD Ireland turned a double-decker bus into a mobile depot. In the more densely populated areas of the three towns, the company deployed 12 electric bikes with mini trailers to provide a “green last mile” delivery. DPD Ireland calculates that the CO2 saving from this scheme which replaced ten diesel vans on the road saved around 550Kg of CO2 emissions each week. According to Mr Atkinson, the company is looking at how it can replicate the scheme’s success elsewhere.