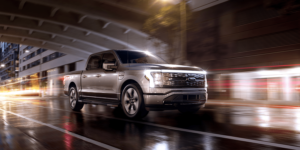 Ford has unveiled the long-awaited all-electric variant of the F-150 pickup truck in the US. Called the F-150 Lightning, it is due to be launched in spring 2022 with two battery options for 230 or 300 miles of range.

That equates to the equivalent of about 370 and 480 kilometres of estimated EPA range, respectively. The pickup will be sold through more than 2,300 EV-certified Ford dealers in the US. Prices for the F-150 Lightning start at a surprisingly low $39,974 before subsidies.

Since Ford has not yet reached the previous cap on electric car sales in the US, the brand’s vehicles still qualify for the US government’s $7,500 tax credit, bringing the starting price down to around $32,500 in the basic Commercial variant. The XLT trim is to be available from $52,974, with the top-of-the-line model asking around $90,000. Interested parties can reserve the vehicle now for a deposit of 100 dollars.

Moving on to the technical specifications, the F-150 Lightning is offered exclusively with all-wheel drive. The standard version has a power output of 318 kW, the more powerful models come up to 420 kW and 1,050 Nm torque. With this, the electric pickup should be able to move a payload of 2,000 pounds (907 kilograms) and a towing capacity of 10,000 pounds (4.53 tonnes), according to Ford. However, it must be mentioned here that the payload mentioned applies to the small battery (Extended Range: 1,800 pounds or 816 kilograms), but the towing capacity was given for the large battery (Standard Range: 7,700 pounds or 3.5 tonnes).

The American company did not give any information about the size of the battery, but they do about the charging time. With the maximum 19.2 kW AC charging power, a full charge should take eight hours, which would correspond to 153.6 kWh of energy for the extended-range battery. The usable energy content of the battery should therefore be in this range. US portals like Electrek estimate the gross energy content at 170 to 180 kWh based on this calculation.

The DC charging power peaks at 150 kW, and Ford quotes a charging time of 41 minutes from 15 to 80 per cent. Our usual calculation at this point of the average charging power in the stated range should be taken with particular caution here, as the net capacity of the battery has only been calculated and is not an official value: the eight hours charging time is certainly not a very accurate figure. If we take 150 kWh of usable energy content as a basis, 97.5 kWh will be charged in the 15-80 per cent window, which would correspond to an average charging power of 143 kW in 41 minutes. In other words, with a maximum output of 150 kW, there would hardly be any significant reduction in charging power up to 80 per cent state of charge.

For the electric F-150, Ford has reinforced the existing ladder frame in some places to accommodate the additional battery weight in the frame. Pictures from US media show that the battery is double-decker in the rear. The high-voltage storage system is completely installed between the axles, which means that the F-150 Lightning also has a full spare wheel mounted under the rear frame.

Like the E-Transit, the F-150 Lightning can also deliver electricity. The basic version can power devices with up to 2.4 kW; in the Larait and Platinum trims, even 9.6 kW is possible ex works. The power can be taken either via the charging port in front of the driver’s door or sockets in the interior, the cargo area or the frunk.

Speaking of the frunk: Ford calls this a “high-tech mega-power frunk”, and not just because of the socket. The load compartment under the front bonnet holds an impressive 400 litres and can accommodate a payload of up to 182 kilograms. The waterproof compartment is said to be able to carry two carry-on suitcases or two sets of golf clubs.

Inside, the F-150 Lightning features a 12-inch digital instrument cluster. Depending on the trim, a 15.5-inch infotainment screen is installed, running Ford’s new “Sync 4A” system. This should not only enable cloud-based route guidance, but also services such as Android Auto, Apple CarPlay or integrated Amazon Alexa apps. As in the Mustang Mac-E, the screen itself is mounted on edge.

US President Biden took the electric F-150 for an early spin.

The design with the LED light strip at the front was no longer a big surprise at the premiere: Ford had not only hinted at it in teaser pictures, but also unveiled it itself one day before the long-planned premiere. When US President Joe Biden visited Ford at relatively short notice, they decided to show the latest model to Biden, who is an avowed electric car advocate. So the F-150 Lightning not only stood unveiled in the background during Biden’s speech, but was also driven by the US president for a brief test drive.

Biden almost came into contact with the F-150 Lightning a little earlier: Ford wanted to use cells from SK Innovation for the model. In the legal dispute with LG Energy Solution, SKI threatened to withdraw from the US business if Biden did not lift the import restrictions imposed by the US Trade Commission. Biden was spared this intervention, as the two Korean companies have since come to an agreement.

Instead of a US withdrawal, it now looks like SKI will cooperate more intensively with Ford: According to Reuters, there is to be an announcement later today on a battery joint venture between Ford and SK Innovation.

Ford has now also finally revealed details on the battery capacities of the F-150 Lightning e-pickup presented in May as part of an online event. Net capacities are 98 kWh for the standard range version and 131 kWh for the extended range variant. Ford again confirmed the known range figures of 230 or 300 miles (370 or 480 kilometres).

This means that the battery sizes are slightly below the calculations made using the known information on charging power and charging time. In the charging window from 15 to 80 per cent, 85 kWh are recharged in 41 minutes, which results in an average of 124 kW – with 150 kW at the peak.