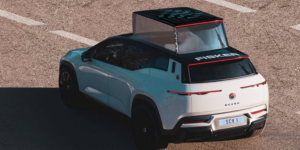 Fisker Inc. founders Henrik Fisker and Geeta Gupta-Fisker have been commissioned to design a Popemobile for the head of the Catholic Church, Pope Francis. The vehicle will be based on the Fisker Ocean electric SUV.

So far, the electric mobility founders already presented Pope Francis with images of the proposed design during a meeting at the Vatican. This is also not the Vatican’s first dealing with e-mobility, as a Renault Kangoo electric van was gifted to the Vatican in 2012, which was not used by the Pope himself, however. Pope Francis was then finally driven around in a hydrogen-powered Toyota Mirai in Japan in 2019, while Mercedes-Benz has also made hybrid popemobiles for the Pope.

Which Ford in Fordwich?