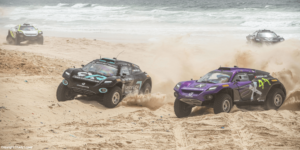 Nico Rosberg’s team won the second race in the Extreme E electric off-road racing series. After the team already managed to win the opening race in Al-Ula, Saudi Arabia, at the beginning of April, Rosberg X Racing also retained the upper hand at the Ocean X-Prix.

At the wheel of Rosberg X Racing’s Odyssey 21 unit race car were again Molly Taylor and Johan Kristoffersson. “I’m very happy that we won as a team in Extreme E for the second time. Two out of two – wow!” said Nico Rosberg, who was also on-site during the event, as he was at the Desert X-Prix.

Rosberg praised the team performance in the process, as all the teams have little experience with the cars and the conditions vary greatly at each round. “It’s so difficult because nobody really understands the cars because you don’t have the opportunity to test them,” Rosberg said. “So you have to guess and figure things out – as a team here we’re really trying to develop a Formula One approach to Extreme E that really helps us as a team to perform.”

In the Saudi Arabian leg of the racing series, Johan Kristoffersson was first in the car in the final run and took the decisive lead, however, this time Molly Taylor was involved in the important scenes of the final run as the starting driver. After a contact with Cristina Gutiérrez from the X44 team of Rosberg’s former Formula 1 team-mate and opponent Lewis Hamilton, Taylor took the lead. Gutiérrez had to get out of the damaged car, Mikaela Åhlin-Kottulinsky from the team of former Formula 1 World Champion Jenson Button also had to retire after the first corner with a defective rear axle.

Taylor brought the Rosberg race car into the transition zone with a small lead over Stéphane Sarrazin in the Veloce. There, the race was briefly interrupted in order to safely recover the two damaged cars. On the subsequent second lap, Kristoffersson edged out Jamie Chadwick in the Veloce, giving Rosberg X Racing the win ahead of Veloce Racing, which had a poor showing in the Saudi desert.

The Ocean X-Prix took place in Senegal not far from the capital Dakar. The course was situated between the Atlantic coast and Lac Rose, often referred to as Lake Retba in German. The third round of the Extreme E, the Arctic X-Prix, is scheduled to take place in Greenland on 28 and 29 August.

Rolls-Royce confirms their first BEV is under development