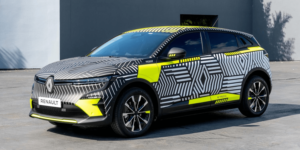 Renault is sending the first pre-production vehicles of the all-electric Mégane on the road. 30 of them will be on public roads this summer for test drives with Renault engineers.

In October 2020, Renault had presented the electric concept Mégane eVision for the first time as a preview of the future production model. The French company now says that this production version will be called Mégane E-Tech Electric and is scheduled for market launch in 2022. After the new Renault CEO Luca de Meo had already replaced the designation ‘Z.E.’ with a simple ‘Electric’ for the electric Twingo, it is becoming apparent that Renault will dispense with the ‘Z.E.’ branding completely in future.

The Mégane E-Tech Electric is based on the CMF EV platform of the Renault-Nissan-Mitsubishi alliance. In the brief announcement about the road tests, Renault also revealed the first technical data: The electric Mégane will have a 160 kW electric motor and a 60 kWh battery pack, which should enable a WLTP range of up to 450 kilometres.

This gives the Mégane E-Tech Electric similar data to the base model of the Nissan Ariya, which is also based on the CMF-EV. The Japanese company also specified an output of 160 kW for their electric SUV in the base, but speak of a 63 kWh battery. The greater difference is in the range, which is said to be only 360 kilometres for the Nissan SUV. However, Renault has not specified whether the “up to 450 kilometres” for the Mégane is the combined WLTP value or the WLTP city cycle.

Renault has not yet revealed whether the Mégane will also get other powertrain options. The Ariya is also planned with a larger battery (87 kWh), then the version with one engine comes to 178 kW. In addition, there will also be an all-wheel-drive version for both battery sizes. However, the premiere of the Ariya will be postponed by a few months due to the chip shortage, as Nissan recently admitted.

As for the 30 test vehicles, Renault only states that they were built at its Douai plant in France. The camouflage pattern was specially designed by Renault Design. The “play of patterns and lines” is supposed to be reminiscent of the new Renault logo.