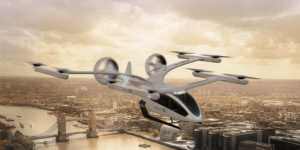 Deliveries are each scheduled to begin in 2026. Halo Aviation, a helicopter tour operator in the US and UK, has placed an order with Eve for 200 eVTOL air taxis. Half will be deployed in the US and half in the UK for the operator in the future. Beyond the order, Eve and Halo intend to collaborate on the development of future eVTOL flight operations, an air traffic management system, and Eve’s fleet operations and services product offering.

Halo currently operates Sikorsky S-76 and Leonardo AW109 and AW169 helicopters. The company says it intends to continue to operate these and gradually bring the e-flight taxis into service. Halo is a Directional Aviation brand, recently formed by the merger of Associated Aircraft Group (AAG) in the US and Halo Aviation Ltd in the UK.

“We believe Eve has designed an aircraft that is well-prepared for not only initial certification but also has a proven track record of production,” said Kenneth C. Ricci of Directional Aviation. “The outstanding lineage of aircraft design, certification and production that Embraer brings to this aircraft positions Eve with significant advantages in the competitive landscape. And our background as operators has taught us that product support is absolutely vital to the overall success of new programs.”

Eve has received a second major order from South American helicopter operator Helisul Aviation. The latter is ordering up to 50 units of the electric aerial taxi. Helisul plans to start air taxi operations in Brazil with the aircraft from 2026. With around 50 helicopters, the company is considered one of the largest civil helicopter operators in South America. Beyond the order, Helisul and Eve have agreed to first simulate eVTOL flight operations with helicopters.

Luis Carlos Munhoz da Rocha, commercial director of Helisul, said: “Eve is looking far ahead of the market needs and Helisul shall follow all its steps hand-in-hand. With cities growing bigger and traffic more and more congested, our partnership to build intelligent solutions and practices for urban mobility in the big cities will improve quality of life reducing air pollution and moving times with door-to-door transportation.”

Eve Urban Air Mobility Solutions was only established in October 2020 as an Embraer innovation incubator and is based in the US. It aims to create a complete portfolio of solutions for the urban air mobility market. André Stein, former head of strategy at EmbraerX, has been appointed CEO of Eve. The company said that after almost four years of incubation within EmbraerX, the time was right to establish Eve as an independent company.

The company’s eVTOL is said to be a four-seater aircraft that will initially be manually controlled but will also be able to fly autonomously in the future.