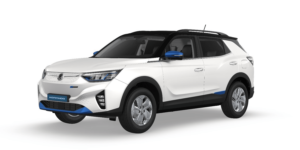 The South Korean car manufacturer SsangYong Motors has started series production of its first electric model, the Korando e-Motion. Export is the priority: the first vehicles are to be delivered to Europe in August this year.

The market launch of the Korando e-Motion, developed under the project name E100, is scheduled for October in Europe, according to a company press release. Delivery to the UK is scheduled for later in the year. SsangYong has not yet announced plans for the domestic market. The manufacturer cites the current acute bottlenecks in the supply of semiconductors as the reason.

The company has also announced its next electric model: a mid-size electric SUV under the project name J100, which the company plans to launch next year.

SsangYong Motors is undergoing a restructuring process, according to the press release. The company describes the announcement of the new vehicles as part of the restructuring. It said the company has decided to “become the driving force of this new self-rescue plan as part of a future merger and acquisition (M&A).”

The focus, it says, is on a comprehensive alignment with the future demands of the international automotive market. To renew confidence in the brand, ensure survival in the fast-changing automotive market and achieve future growth, he said SsangYong aims to quickly complete the company’s recovery process and create an environment leading to a successful acquisition by finding a new investor committed to continued future investment. “We are creating a strong foothold for the company’s rehabilitation through a successful M&A and doing our best in developing new cars by addressing the fast-changing automotive trends,” said manager Yong Won Chung.

The Korando initially launched in 2019 with internal combustion engines. More details on the electrified version were revealed in late 2019, but have not been confirmed again since. At the time, media reports stated that the electric vehicle would produce 140 kW. In terms of acceleration, the vehicle should beat the petrol engine. At that time, there were no confirmed figures for the top speed, but the British magazine assumed 150 km/h at the time for reasons of range preservation.

The battery pack, with cells from LG Chem, is said to offer a capacity of 61.5 kWh, according to 2019 figures. According to the old NEDC standard, SsangYong reported a range of 420 kilometres, so in real terms, 300 to 320 kilometres should realistically be possible. No information on the charging system was provided in the report. The fourth-generation Korando, which SsangYong unveiled in spring 2019, is 4.45 metres long, about the same size as a VW Tiguan.

SsangYong Motor is a Korean SUV manufacturer. The range includes a small SUV called the Tivoli, the half-sized Korando, the mid-sized SUV J100 and the larger Rexton.

BMW launches street tests of the i-Hydrogen Next