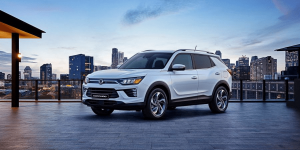 An electric version of the new Korando is now available in more detail. But the first electric model of the Korean manufacturer SsangYong will take some time to premiere.

As Auto Express reports, the SsangYong electric car will come onto the market in the first quarter of 2021 and deliver 140 kW. This would make the electric version the top model in the series, as the most powerful engine in the range to date is a 120 kW petrol engine. According to Auto Express, when it comes to acceleration, the car called Korando E100 should also beat the petrol engine. Although the company has given no details on the vehicles top speed, the British magazine assumes 150 km/h for reasons of range preservation.

The battery pack with cells from LG Chem should offer a capacity of 61.5 kWh. According to the old NEZF standard, SsangYong states a range of 420 kilometres – in real terms, 300 to 320 kilometres should remain.

SsangYong just presented the fourth generation of the Korando this spring. With a length of 4.45 metres, the SUV is about the size of a VW Tiguan. A comparison with the Korean electrical competition in the form of the Hyundai Kona Elektro and Kia e-Niro is difficult, however, as the Kona is almost 30 centimetres shorter and the e-Niro ten centimetres shorter. Nevertheless, the two models from the Hyundai-Kia group offer 10 kW more power and with their 64 kWh battery also more range than the SsangYong.

In addition to the fully electric version from 2021, the South Korean carmaker wants to further electrify the Korando series. A version with diesel-mild-hybrid is supposed to follow in 2022. Prices have not yet been released for the Korando E100.