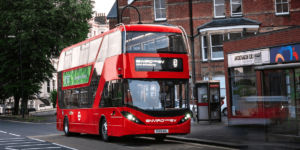 The electric bus cooperation between BYD and ADL announces the largest order in the UK to date. The public transport operator, RATP Dev in London, ordered 195 new electric buses from BYD-ADL, including 127 double-deckers and 68 solo buses.

More than 400 electric buses from BYD-ADL have so far cumulated 20 million miles driven without emissions in London alone. Almost 300 more vehicles are on order, including the new major purchase, meaning RATP Dev London will operate the largest electric bus fleet in London from early 2022.

Deliveries of the latest order will begin in the summer. 68 Enviro200EV single decks – including 21 compact 10.2-metre models – and 127 Enviro400EV double-decks built by BYD.-ADL will be based at depots that serve routes in the west of the capital. The buses will join 36 existing BYD-ADL electric single decks in service since 2018 and 29 double-deckers delivered last year. The manufacturer says feedback from RATP Dev London on these in-service vehicles has been “very positive,” with the large Enviro400EV, in particular, delivering “exceptional reliability” on 24-hour route operations.

Catherine Chardon, Managing Director of RATP Dev London, added, “We launched our two first 100% electric routes less than two years ago, as well as London’s first fully electric 24-hour double-decker bus route last year. By the beginning of 2022, we will operate 15 zero-emission routes and have five of our garages converted to electric.”

When announcing the deal, RATP Dev London also said this confirmed its commitment to supporting Transport for London’s electrification plan for the capital’s bus network, a key objective of the Mayor’s Transport Strategy for 2018, under which all TfL buses will be zero emissions by 2037, with all of London’s transport becoming emissions-free by 2037.

BYD is among the leading companies in e-mobility, especially when it comes to electric buses. The Chinese company entertains several partnerships in different countries, where it builds electric buses with the help of local bus builders. In the case of ADL, a subsidiary of global bus manufacturer NFI Group, BYD describes the partnership as a “proven combination” of its battery-electric driveline technology and ADL’s British-built bodies. These can be fully customised to reflect operating requirements, the company adds. BYD-ADL launched five years ago.