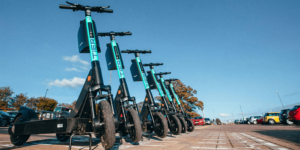 In Germany, divers have discovered more than 500 e-scooters at the bottom of the river Rhine. Local TV station WDR said rioters had thrown them into the river from a bridge in downtown Cologne. As if not disturbing enough, the divers also discovered something else.

The team of construction divers were not only disturbed by the scrap: “We notice that some of these scooters secrete a sticky mass,” they told WDR. It looks like the batteries are leaking chemicals into the Rhine, the team suspects, and says this has become a regular find in the river.

WDR sent the five largest rental companies in Cologne a list of questions and a request for comment about e-scooters in the Rhine and their recovery, yet the answers were largely evasive.

One unnamed scooter provider essentially said to leave them submerged when the professional divers offered to salvage the stranded scooters. Not worth it, reckoned the provider.

A water expert from an environmental organisation in the region, Paul Kröfges, told WDR the scooter rental company’s behaviour was “scandalous”. He claimed, “There are hundreds of these vehicles in the Rhine in Cologne alone, toxic and hazardous substances are released, and the owners want to leave their scrap in the Rhine”. Kröfges added, the Rhine supplied drinking water for about 30 million people in Europe.

From the five scooter providers asked to comment, Tier made a formal statement saying it was “very rare for one of our scooters to be thrown into the Rhine or other bodies of water and we are simply unable to recover it directly”. The company also pointed out that the batteries were sealed but confirmed that corrosion could break the seal.

The company did not answer WDR’s question about how many Tier scooters lay submerged in the Rhine. The other four companies did not provide any information either.

The issue is, however, widespread and not specific to Cologne. In an interview with newcomer Superpedestrian (not yet in Cologne), the VP Haya Douidri told us about a slightly miraculous function that helps the scooter “realise it is submerged and takes measures to protect itself.” She would not disclose what this entails exactly, but one of them is sending engineers an SOS.

The Rhine if of course, deep and the current runs strong. So two other providers in Cologne, Bird and Voi, have now issued measures to prevent the kick-scooters from coming near the river in the first place. Both imposed parking bans on the banks of the Rhine and on the bridges to prevent more scooters from ending up in the water. Customers will also no longer be able to end their rides near the Rhine. According to WDR, Bird also announced that it would commission a specialist company to salvage the scooters in the Rhine.