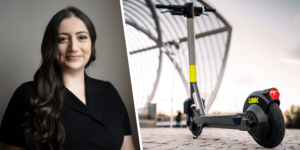 We sat down with Superpedestrian Haya Verwoord Douidri. She is the new VP of EMEA for the Boston-based company and told us about far-reaching expansion plans for the Link scooter system that claims extremely advanced geofencing and other AI tech designed to declutter scooter-sharing in cities.

Haya Verwoord Douidri is charged with spearheading Superpedestrian’s new presence across Europe and the Middle East with its intelligent shared e-scooter, Link. She previously worked in sustainability at the UN and Shell and was instrumental in shaping European activities for micromobility company Bird, her new employer Link announces.

As a backdrop, Link is Superpedestrian’s e-scooter sharing system and their vehicle to offer what they call human-scale mobility. Micromobility connaisseurs of the early hours may know Superpedestrian best as MIT spin-off and the Copenhagen Wheel creators and much has moved on since.

Perhaps not yet as known (or widespread) as competitors such as Lime, Bird or Tier, also because Link only launched last year, the young executive beheld that they never wanted to “just deploy” but had looked to engineer a solid product with safety and advanced technology in mind from the start.

As you would expect from the Copenhagen Wheel initiators – an e-bike retrofit supposed to gather climate data and all electronics in one wheel – the Link scooter too comes packed with technology. Designed in Boston and modelled on the automotive industry, Haya Douidri claims 67 regular stress-tests and engineering ideas led to the scooter. It also boosts a column taken after a baseball bat and front-wheel suspension. Douidri added, Superpedestrian spent 75 million dollars on scooter development and patented VIS technology (Vehicle Intelligent Safety system) – microcomputers and 73 sensors within the vehicle that monitor mechanical and electronic components capable of “self-protection” measures – we will come to that in a second.

The most recent upgrade, Briggs, is arriving inside the global fleet as you speak. Link scooters may now run for 55 – 61 miles, 10 per cent longer than before, says the young business executive. The updated AI is supposedly also offering unmatched geofencing capabilities. The geo-fence data is stored on the vehicle rather than in the cloud, making it the fastest and most accurate system on the market, the Superpedestrian VP suggested in the call. Key data includes 0.7 seconds geofencing versus 30 seconds industry average, explained Douidri. They still include GPS data as well.

The same goes for the cloud. The machine is capable of sending data to engineers every 30 minutes. This is in addition to about 140 “self-corrective” measures. Douidri gives the example of scooters being thrown into waterways, which is something that indeed happens. The scooter soon “realises it is submerged and takes measures to protect itself.” She would not disclose which exactly, but one of them is sending said engineers an SOS, so to speak.

As Superpedestrian calls it, self-balancing or anti-tipping technology is another measure that cities will be interested in, especially those that suffered from scattered scooters during the first and rather uber-keen roll-outs. The Superpedestrian VP said that some operators lost their licenses due to a lack of control. Lime was among them. Even safety-focussed Voi from Sweden had to withdraw from some places. For the Link scooters, she points to the more accurate geo-fencing, saying “when you enter the zone, you really enter the zone,” be it a slow ride, or no ride, or no park area.

We have yet to get the opportunity to try – Superpedestrian said they did take part in the London tenders but were only shortlisted. “But this is only for the trial process, and we aim for the long-term,” added Douidri. “They are looking into third operators or second operators in the UK, and it is always better to offer choice.” Indeed the UK is undergoing an extended trial period that will lead to adjusted legislation, then clarifying the use of e-scooters across the country.

On the continent, the situation looks already different. In her first six months in post, Haya Douidri introduced fleets in Rome and Madrid and announced they were launching the scooter sharing in Torino, Palermo, Aprilia, and Malaga in Spain this week. She also mentioned targets of adding 20 European cities to Link before the end of August, which would turn Superpedestrians offer to “8-9 times our current size.”

For current use in places like Boston or Seattle in the States or Vienna and Rome, Douidri explained they see “much longer trips since Covid, so people are using scooters as a full journey.” About “70- 80 per cent of users are local,” she added and seemingly on longer trips, i.e. not replacing a walk with a ride.

On a last note, Haya Douidri pointed to her responsibility for sustainability. Not only claims Superpedestrian to never use gig-workers, not even in the US but their own personnel, Douidri also pledged, “I will never sign-off scraping scooters.” Instead, sustainability has been part of the design process from the start. Wearing components can be easily replaced, whereas others are made to last, she said. The VP gave the battery “12-13 years and a scooter 7-8 years” in our conversation. We will see about that in future.

The conversation took place as part of a virtual coffee meet-up between London and The Hague.