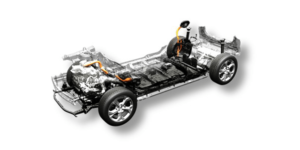 Mazda has revealed its new technology and product strategy up to the year 2030. Between 2022 and 2025, the Japanese automaker is planning three purely electric models, five plug-in hybrids and five hybrid models with Toyota technology based on the ‘Skyactiv Multi-Solution Scalable Architecture’.

Until now Mazda has managed to get one electric model, the MX-30 to market. In 2025, Mazda then plans to introduce a pure electric car platform, which will be called ‘Skyactiv EV Scalable Architecture’ and will be suitable for diverse vehicle sizes and body types, according to its ‘Sustainable Zoom-Zoom 2030’ roadmap. By 2030, all Mazda models are expected to “feature some degree of electrification.”

Mazda expects all-electric cars to account for 25 per cent of total sales by 2030. That’s less than many other automakers, but still significantly more than Mazda’s 2018 forecast when the Japanese manufacturer still expected a hybrid share of 95 per cent by 2030.

Before the all-electric car platform is deployed in the middle of the decade, Mazda plans to push electrification on the existing, flexible ‘Skyactiv Multi-Solution Scalable Architecture.’ According to the Japanese company, this is used in transversely installed power units in the company’s small products and in longitudinally installed power units in their large products. Based on this architecture, Mazda says it plans to offer different electrification solutions in order to meet different customer needs, environmental regulations and power generation infrastructure in each market. Based on this platform, three purely electric models, five plug-in hybrids and five hybrid models have been announced for the period between 2022 and 2025, which are to go on sale primarily in Japan, Europe, the USA, China and the ASEAN countries.

Mazda itself is aiming for carbon neutrality by 2050. In addition to electrifying its model lineup, the automaker also announced plans to integrate autonomous driving technologies into its vehicles in the future. The first stage of the autonomous driving system – christened Mazda Co-Pilot 1.0 – is to be introduced in the first Mazda vehicles from 2022. Also part of the strategy now presented is the development of software technologies for Mobility as a Service applications. The relatively small Japanese manufacturer is cooperating with its domestic competitors, namely Suzuki, Subaru, Daihatsu and Toyota. The common goal is to create standard technical specifications for the next generation of in-vehicle communication devices.