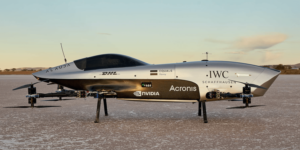 The racing series planned by the Australian company Alauda with electrically powered flying cars is taking concrete shape. The EXA Series will lay the foundation for the large-scale racing series next year.

In the EXA, three events are planned at different locations this year, in which the electric flying cars will be controlled from the ground without pilots on board. The venues are to be revealed at a later date. Manned races are then to be held from 2022. The Airspeeder Mk3 will be used, which Alauda says has already undertaken its first flights.

Alauda says that the EXA acts as a test for the Airspeeder crewed racing series, providing an important technical testbed for the teams and the perfect space to develop pilots’ skills.

The Australian company unveiled its race series plans and the Airspeeder Mk3 in February. The eVTOL is expected to reach speeds of more than 120 mph. The model is already the third version of the flying machine, the MK1 was shown back in 2017. In 2019, Alauda had shown another prototype at the “Goodwood Festival of Speed”. The dMK3 was made possible by a financing round that brought Alauda a seven-figure sum last year – from DHL, among others.

More than ten identical Mk3s are to be produced and delivered to teams this year. Each Airspeeder race, by the way, involves quick pit stops on the order of 20 seconds. To achieve this, Alauda engineers have developed a “slide and lock” system that allows the batteries to be quickly removed and replaced on the ground.