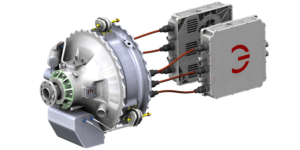 According to MagniX, the electric drives have been optimised based on thousands of ground tests and flight hours for real-world commercial aviation applications to “further accelerate the path to electric aircraft certification and better align the future of electric aviation with reality.”

The direct-drive EPUs operate at 2,300 rpm or less, are liquid-cooled, and are rated for 30,000-foot altitudes in a depressurized environment. Both systems are said to be capable of driving a propeller governor and standard aircraft accessories via the forward cone of each engine.

“Based on design, engineering and operational testing in real-world conditions, we are making incredible strides to advance the aviation industry and accelerate the adoption of electric-powered aircraft,” said Roei Ganzarski, CEO of MagniX. “The magni350 and magni650 EPU models will enable low-cost, zero-emission and quieter flights around the world in the very near future.”

MagniX has been supplying related components for commercial electric aircraft such as the eBeaver and eCaravan for several years. The company says that it has been utilising key learnings from these ongoing flights and extensive ground testing, and has introduced a number of new features.