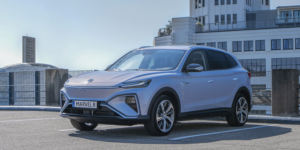 MG Motor has announced the market launch of its all-electric SUV, Marvel R Electric, in Europe. The model is now available for pre-order. The electric SUV will arrive in European MG Brand Stores in autumn this year.

MG Motor gives list prices for the Marvel R, which was unveiled in March, ranging from 40,000 to 50,000 euros. The Marvel R is available in all-wheel-drive (AWD) and rear-wheel-drive (RWD) versions and Comfort, Luxury and Performance variants.

With the Marvel R Electric, the former British brand now belonging to the Chinese SAIC Group has a second SUV model in the C-segment in its portfolio alongside the MG EHS plug-in hybrid. The large electric car is 4.67 metres long and features a wheelbase of 2.8 metres. According to the company, the SUV is built on an aluminium frame and accelerates from 0 to 100 km/h in 4.9 seconds. The top speed is 200 km/h.

Prospective buyers can choose between two powertrain versions: a tri-motor powertrain – with three electric motors, all-wheel drive and a maximum output of 212 kW, as well as a WLTP range of 370 kilometres. The RWD version with two electric motors has a maximum output of 132 kW and a WLTP range of 402 kilometres. Both versions get their energy from a 70-kWh lithium-ion battery. At AC chargers, the Marvel R gets its power via a three-phase 11-kW onboard charger. At a DC charging station, the battery is charged from 5 per cent to 80 per cent after 43 minutes, although MG does not mention the specific charging power here. With a V2L (vehicle-to-load) function, the lithium-ion battery can also supply external electrical devices such as air pumps, e-scooters, laptops or another electric car with power.

The maximum towing capacity of the MG Marvel R Electric is 750 kilograms (unbraked), and the company has not yet given information on the braked towing capacity. The trunk holds 357 litres, and with the folding rear seats, this can be expanded to 1,396 litres. The RWD version also offers 150 litres of additional luggage space under the hood.

The interior of the Marvel R is equipped with a digital cockpit and a 19.4-inch touchscreen, which can be used to operate the functions of the MG iSMART connectivity system. The various functions – including real-time traffic navigation, parking space search, MG Touchpoint search, weather forecast and Amazon Prime online music – are controlled via a smartphone app. The system can also be operated via voice control.

The automaker says it will announce more information and final European retail prices for the three variants at launch.

MG has had a presence in the UK with its cars for some time. That’s due to historical reasons: The SAIC subsidiary was a once British brand. After initially expanding into smaller neighbouring markets such as Norway, Iceland, Denmark and the Netherlands, MG now wants to gain a foothold in Europe on a grand scale. Among other things, market entry in Germany, France and Italy is planned and recently completed.

In Germany, the electric ZS EV, a compact electric SUV with 105 kW of power and 353 Nm of torque, has been available since the beginning of the year. The ZS EV is governed at 140 km/h and accelerates from a standstill to 100 km/h in 8.2 seconds. The battery with an energy content of 44.5 kWh enables a WLTP range of 263 kilometres. At a DC charging point, the battery is 80 per cent charged again after 40 minutes. The price: 31,990 euros before subsidies.

The plug-in hybrid SUV EHS, whose electric range MG specifies at 52 kilometres, is also to follow in this country. The system output is 190 kW, the sprint from 0 to 100 km/h in 6.9 seconds. Unfortunately, the 16.6 kWh battery can only be charged with a maximum of 3.7 kW. The price is just under 35,000 euros before subsidies.