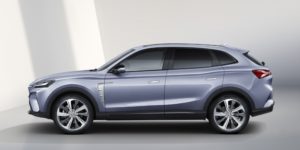 The British SAIC brand MG Motor is increasingly expanding into continental Europe. After the recently launched all-electric SUV ZS EV and the soon to follow plug-in hybrid MG EHS, the carmaker has announced the next electric duo: the SUV Marvel R Electric and the compact estate MG 5 Electric.

After expanding into initially smaller neighbouring markets such as Norway, Iceland, Denmark and the Netherlands, MG now wants to gain a foothold in continental Europe on a grand scale. Among other things, market entry in Germany, France and Italy is planned and has recently been completed.

The electric ZS EV, a compact electric SUV with 105 kW of power and 353 Nm of torque, has been available in Germany since the beginning of the year. The ZS EV is limited to 140 kph and accelerates from a standstill to 100 kph in 8.2 seconds. The battery with an energy content of 44.5 kWh is said to allow a WLTP range of 263 kilometres. At a DC pillar, the battery is supposed to be 80 per cent charged again after 40 minutes. The price stands at 31,990 euros before subsidies.

The plug-in hybrid SUV EHS, whose electric range MG specifies at 52 kilometres, will follow shortly in this country. The system output is said to be 190 kW, the sprint from 0 to 100 km/h in 6.9 seconds. Unfortunately, the 16.6 kWh battery can only be charged with a maximum of 3.7 kW. The price is just under 35,000 euros before subsidies.

Matt Lei, CEO of MG, calls the ZS EV and the EHS plug-in hybrid extremely practical vehicles that meet the most important needs. He distinguishes the newly unveiled upcoming electric car duo from them: “With the new MG Marvel R Electric and MG5 Electric, we introduce two next-generation battery electric vehicles that meet the demands of the most discerning European motorists. Such as an attractive range, fast charging capability, advanced safety features and smart pricing.”

The Marvel R Electric is a 4.70-metre SUV that comes with two or three electric motors, depending on the version. The power of the top model is 212 kW, the torque 660 Nm. The British do not mention the energy content of the battery. They only say that the WLTP range is “over 400 kilometres” and that the battery can be recharged to 80 per cent in 30 minutes via DC charging. The technical data sheet also mentions a top speed of 200 kph and acceleration from 0 to 100 kph in under five seconds. There is also an onboard charger that allows three-phase charging with up to 11 kW.

The basic version of the Marvel R Electric is rear-wheel drive, but MG does not provide performance data. Other highlights mentioned by the British brand include a towing capacity of 750 kilograms, a built-in heat pump and a V2L connection for powering external consumer goods. The boot is said to hold 357 litres, or 1,396 litres if the rear seats are folded down. The base model also offers an additional 150 litres of storage space at the front.

The MG5 Electric is a 4.54-metre-long compact estate with a wheelbase of 2.67 metres. The electric car has an output of 135 kW and a torque of 280 Nm. As far as the still meagre battery specifications are concerned, the data coincides with those of the Marvel R Electric (range “over 400 kilometres”, AC charging: 11 kW three-phase, DC charging: 30 minutes to 80 per cent SoC). The MG5 Electric is said to score points with 578 to 1,456 litres of boot space, a towing capacity of up to 500 kilograms, a roof load of 75 kilograms and the option of installing a bicycle rack on the trailer hitch. In addition, the estate is also V2L-compatible.

The Marvel R Electric is due to be launched on the European market in May and the MG5 Electric in October. The MG5 series has already been on sale in the UK for some time, but will undergo a comprehensive facelift before being launched in other European countries. MG has not yet announced prices for both electric cars.

According to the brand’s website, sales in Germany will be handled by so-called ‘brand stores’ and ‘MG agents’. It is unclear whether the vehicles can only be presented there and booked for test drives or whether they will also be sold. In any case, the models will be available for purchase online.