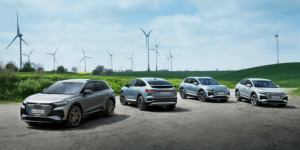 Audi has now officially confirmed its accelerated switch to electric vehicles. The last new combustion engine will start production in 2025, but Audi is keeping a loophole open for the Chinese market.

A few days ago, there were numerous reports leaking the news that Audi does not want to bring out any new models with all combustion engines after 2026 (including hybrids) while sales of combustion engine vehicles will continue until the early 2030s.

The German luxury carmaker belonging to the Volkswagen Group company has now confirmed these plans and provides a number of details. Audi now says that the production of its last completely newly developed internal combustion model will start in just four years. From 2026 onwards, the German carmaker will only launch new models on the global market that are purely electric. Audi says it will gradually phase out the production of internal combustion engines to come to a complete stop by 2033 –all of which confirms the leaked information a few days ago. That is, ironically, with the exception of the world’s largest electric car market: China. Audi expects demand for combustion engines to continue there beyond 2033, which is why it is considering a supply of vehicles with combustion engines from local production. Audi says, “The exact timing of the combustion engine’s discontinuation at Audi will ultimately be decided by customers and legislation.”

In the initial phase, Audi wants to have more than 20 purely electric models in its portfolio by 2025. So far, there are the purely electric Audi e-tron and e-tron Sportback (including the S models), which are to get another facelift in 2023 and are to be replaced by the Q8 e-tron in 2026, the e-tron GT and RS e-tron GT as well as the Q4 e-tron and Q4 Sportback e-tron. But the expansion of the PHEV models is also on the agenda. “With this roadmap, we are creating the clarity necessary to make a decisive and powerful transition to the electric age. We’re sending the signal that Audi is ready,” said Markus Duesmann, head of Audi AG.

Audi boss Markus Duesmann had apparently already forged this plan at his inauguration a year ago in collaboration with Volkswagen boss Herbert Diess. In March of this year, Duesmann then announced to the German newspaper Frankfurter Allgemeine Zeitung that he no longer wanted to develop new combustion engines. In the interview, the Audi boss justified the decision with the EU plans for a stricter Euro 7 emissions standard. However, Audi will not completely abandon the combustion engine. Audi intends to continue developing the internal combustion engine – by which it obviously means the existing portfolio – until its end. The existing engine generations are to be further improved, towards greater efficiency. “Audi’s last internal combustion engine will be the best we have ever built,” Duesmann said.

Audi also aims to reduce the ecological footprint of its fleet across the entire value chain by 30 per cent by 2025 compared with 2015. By 2050 at the latest, Audi aims to be carbon-neutral across the board.

In its efforts to successfully decarbonise its mobility options and operations, Audi says it is working on the expansion of the supply of renewable energy in Europe. The target here is to generate an additional 5 terawatt-hours of energy from wind and solar projects. This includes collaboration with the German utility company RWE.

Audi says that decarbonising its operations will include examining the entire life cycle of its models, which can be divided into three stages: the manufacturing stage that starts with the extraction of raw materials and goes up to component manufacturing and automobile production; the utilization stage which includes vehicle operation including the supply of power to the vehicles sold; and recycling.

“The corporate strategy ‘Vorsprung 2030’ will ensure that Audi remains viable long into the future,” says Duesmann. “The pace of change in our society is rapidly increasing. That’s why we’re accelerating our own transformation.” The strategy has been formulated by the Board of Management over the past few months, he said.

Audi refrained from a large strategy presentation, such as Renault, Daimler and Stellantis had organised in recent weeks. The Ingolstadt-based company is sticking to the already known plans of the VW Group – which had already presented its strategy for 2030 called “New Auto” (with the participation of Duesmann) in July.

Instead, Audi emphasises in the communication that the company is tackling the transformation “resolutely” with a clear date for the switch to electromobility. “Vorsprung durch Technik’ remains necessary because we can only solve many of the world’s major problems, such as carbon emissions and global warming, through the use of clean technologies,” Duesmann said. That is why Audi is focusing on zero-emission drives, he added. “We don’t simply develop technology for its own sake. It must be consequential and effective in keeping the world moving.”

The fact that there has not yet been a comprehensive strategy presentation is probably also due to the fact that some content is still being worked out in detail. According to the statement, Audi’s chief strategist Silja Pieh is working with her team on a “new development process for a sustainable and forward-looking corporate strategy”. “It is pleasing for our entire team that the topic of sustainability is already deeply anchored in the minds of many employees and the board of management,” Pieh is quoted as saying. “We want to further strengthen responsible business practices in the future and act consistently.”

The differentiation of the electric vehicles is also to be achieved more strongly through quality and design as well as added value for the user – including autonomous driving functions, additional software and digital services.