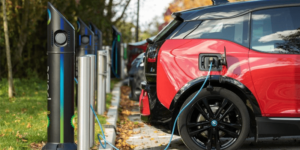 IoTecha calls the trademarked platform IoT.ON and says it allows electric vehicles from “any manufacturer to communicate seamlessly with charging stations to signal when they need recharging.” The platform also gathers information over time to identify patterns and energy requirements of each user.

Being V2G-capable, IoTecha enables EV owners to sell electricity back to the grid through bi-directional charging, given their electric car is ready to do so.

“IoTecha is at the forefront of the trend towards electrification, and their unique technology combines EV charging with smart connectivity to deliver cost and energy savings,” Richard Bartlett, SVP future mobility & solutions at BP, summarised the investment decision. He added that the oil and gas company was “excited to explore how IoTecha can connect with bp’s wider EV infrastructure, in support of our EV charging point targets.”

BP reportedly aims to provide over 70,000 public EV charging points worldwide by 2030 and says the investment in IoTecha is in line with this target.

IoTecha says it would use this investment to scale its operations through bp’s network. In addition, Shaun Healey, BP Ventures Principal, was appointed to IoTecha’s board of directors alongside the investment.

BP Ventures focuses on the new energy business and says it had invested almost $700 million in technology companies since its inception ten years ago. The company is, for example, a long-term investor in Freewire as reported. BP also bought the British network Chargemaster in 2018 and subsequently renamed the company BP Chargemaster. In addition, the UK Polar network now run by BP comprises over 6,500 charge points.

IoTecha is no stranger to us either. The company made our news in 2019 when looking into enabling Plug&Charge according to ISO together with Hubject.