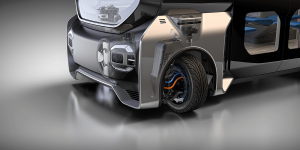 The British company describes the motor as a “corner module”. The fully rotating wheel hub motor can be used for all four wheels of a passenger or goods transporter, meaning that hubs do not need to be specific to the front or back wheels.

Protean says that the hub is the first of its kind for use in commercial vehicles. The unlimited 360-degree steering is possible because each wheel has the ability to be continuously steered 360 degrees around its own axis without restriction. This is made possible by a patent-pending rotating interface located above the main arm of the module.

This manoeuvrability is combined with an innovative suspension, pneumatic height adjustment of the vehicle and a Protean in-wheel electric motor. The module allows the electric vehicle to be positioned sideways, frontally or with the rear directly on the kerb: Passengers can thus move out of the vehicle and onto the foothpath without gaps. The set-up provides the basis for a wide range of applications on busy urban roads and for maximum precision when parking in confined spaces. As soon as the vehicle has come to a standstill, the pneumatic height adjustment ensures that the vehicle is lowered to the kerb. The loading and unloading of heavy goods or the boarding and exiting of the vehicle for passengers with reduced mobility are made smoothly and spatially exacting to each circumstance. 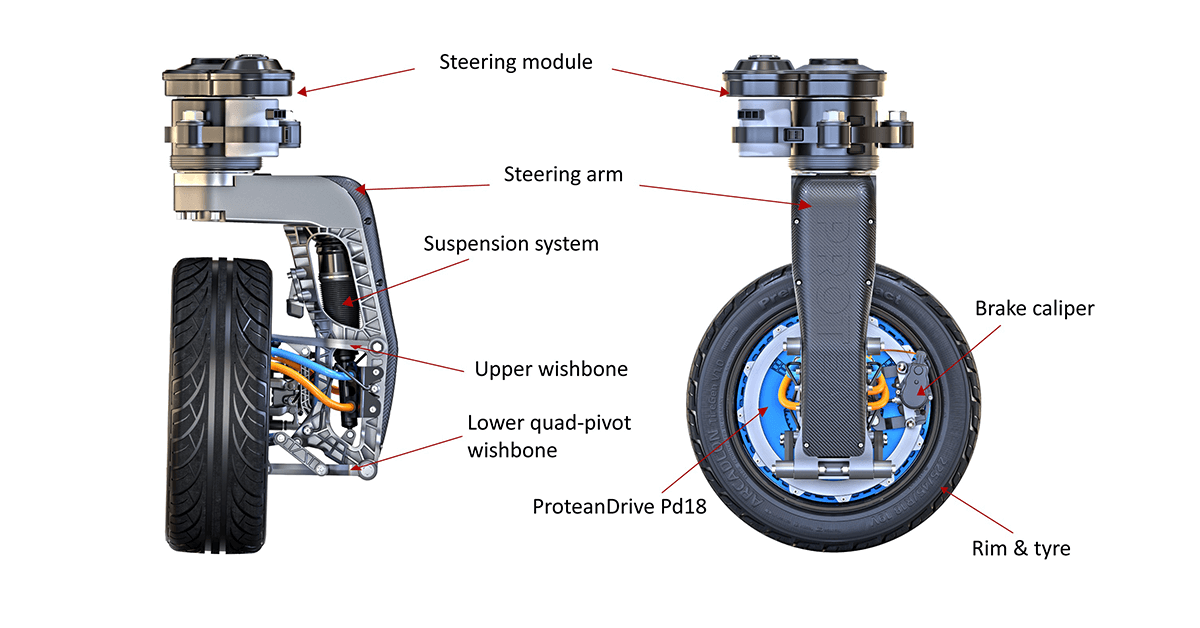 “Transport services are on the rise in urban mobility and a new class of inner-city transport vehicles is needed,” explains KY Chan, CEO of Protean Electric. “Whether private or sharing, for passengers or goods, operated by humans or autonomous – these new transporters must be equipped with new technology to optimally fulfil their purpose.”

For autonomous vehicles, the increased manoeuvrability means that the transporter does not have to stop abruptly when negotiating moving objects in fixed street environments.

The technology is suitable for modular transporters such as the Rinspeed Snap, Schaeffler Mover, Scania NXT concept or the Mercedes Vision Urbanetic. These mobile platforms can be equipped with a wide variety of modules and thus perform several tasks throughout the day in an urban mobility environment – transporting commuters during rush hours, delivering parcels during the day, and collecting waste at night.

The Protean360+ electrical steering unit is located above the interface so that the axle points in the direction of the lower tyre part. At the bottom of the rotating interface, cables for the motor, hydraulics and pneumatic height adjustment of the vehicle pass through the arm of the module to a second static interface and into the motor installed in the wheel. When the Modul arm rotates 360 degrees, the complete component rotates as well. Thus the cable connections are not twisted or pulled.

The electric driving force is provided by a ProteanDrive wheel hub motor. This uses a synchronised permanent magnet motor with integrated inverter and dedicated coolant circuit, all enclosed within the wheel rim. Brake disc and calliper are built into the wheel, and the ProteanDrive motor supports them with its own regenerative braking performance. The motor has an external rotor to maximize torque; this design allows installation of the rare earth magnets without performance reducing brackets. Each ProteanDrive Pd18 motor (suitable for 18″ wheels) delivers 1250 Nm of torque and 80 kW (107 hp) of power at its peak.

Protean Electric was founded in 2008 and holds over 160 patents for electric motors. In June 2019 Saab successor company NEVS (National Electric Vehicle Sweden) announced their take over of Protean to use its electric drive technology in future electric cars. Despite the takeover, Protean Electric continues to operate as an independent company. Through NEVS, Protean belongs to the Chinese real estate group Evergrande, which has recently invested heavily in electric mobility.

Protean CEO Chan says that “We are already in discussions with potential customers who would like to use the module in their future vehicles.” For the planned autonomous electric shuttle Orbit, Fisker will be using wheel hub motors from Protean Electric.

Tropos Motors is expanding to Europe