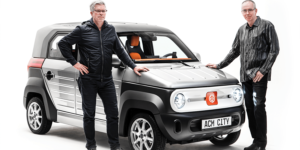 With the ACM City One, ACM Adaptive City Mobility GmbH is showing a preview of the series version of the modular electric vehicle and the associated ecosystem, which was created with funding from the German government.

The ACM City One can be converted in two simple steps to carry either up to four passengers besides the driver or loads of up to 1450 litres in volume and even on a Euro pallet with a fork lift if desired. ACM points out that the electric vehicle can transport commuters during rush hour and then distribute goods in the city as a van, therefore optimally using city space.

The City One has a modular design, and the 3.6-metre-short vehicle can reach speeds of up to 110 km/h. A battery swapping system in combination with intelligent home charging makes the battery-electric vehicle very versatile in use.

The City One is particularly suitable for ride-hailing and shared mobility fleets, supported by the integration of the fleets into a B2B pool sharing platform that optimises vehicle utilisation and ensures round-the-clock energy supply for the operators. For the development of the digital platform of the City One, ACM brings the Porsche subsidiary MHP on board.

The model positions ACM in a niche – namely that for small, light and therefore simple and affordable city EVs that can be operated with low voltage due to their low weight. “This means that they require little power, small, affordable batteries with a maximum of 20 kWh, which means that these vehicles can be charged in a maximum of seven hours using the existing Schuko plug infrastructure – without any fast-charger – which saves a huge amount of money. In addition, as a range extender, four small batteries that can be swapped out manually anywhere,” Leibold told our German colleagues at electrive in 2020 in an interview. Through the intelligent networking of an entire fleet, it would then be possible to ensure the supply of the electric fleet within the urban area through rechargeable batteries or through the Schuko plug, and this is exactly what fleet operators urgently need.

ACM envisages that each vehicle in the fleet will be connected to a digital platform that will use data-based services to help optimise the fleet’s potential. In creating this platform, the company is cooperating with the digitalisation experts of the Porsche subsidiary MHP. The aim is to avoid empty runs and massively increase utilisation, they say.

ACM has also announced that it has hired Dr Karl-Thomas Neumann as an advisor. The former Opel CEO is an investor in ACM and is now expected to provide support in building the overall business model and fundraising. Neumann was CEO of Opel from 2013 to 2017, he was General Motors Executive Vice President and President Europe, as well as a member of the GM Executive Committee. Before joining Opel Neumann was held the position of CEO and Vice President of Volkswagen Group China in Beijing.

“At some point in vehicle development and production, you reach a point where it doesn’t get any cheaper, no matter how much extra effort you put in,” Neumann is quoted as saying in an ACM statement. “The Total Cost of Ownership, or TCO, can only be further reduced for fleet operators, and ultimately for the end customer if additional services and new revenue streams are developed. ACM achieves this through the intelligent networking of the EV vehicle fleet.”