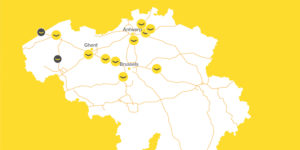 The Flemish Ministry of Mobility has awarded Fastned the contract for providing more fast charging in Belgium. Fastned has been allocated 10 new sites for charging parks on the country’s freeways.

The ten new sites are distributed among locations in the city triangle of Ghent, Antwerp and Brussels, where Fastned will implement parks with charging points in the power range of up to 300 kW. The charging infrastructure specialist will be subsidised with 600,000 euros from the European BENEFIC fund, an infrastructure subsidy for low or zero-emission vehicles and ships. In February, the third Benefic project call was launched with a budget of 1.77 million euros. The grant was conditional on the sites being located along or in the immediate vicinity of the TEN-T (Trans-European Transport Network) core network in Flanders and/or the Brussels-Capital Region.

The Flemish Region has fixed a target of 35,000 additional charging stations on its territory by 2025. With this in mind, the Flemish road transport authority, Agentschap Wegen & Verkeer (AWV), has made several locations available for the Benefic project call. “This third BENEFIC call fits perfectly within the modal shift to sustainable transport,” says Lydia Peeters, Flemish Minister for Mobility. In Flanders, she says, ambitions for electric driving are high. “By 2025, in addition to the 35,000 publicly accessible charging points, I want fast chargers along the major traffic axes at least every 25 km.”

Fastned opened its first charging site in Belgium at the end of October 2020 located in Ostend, Flanders, near Ostend-Bruges International Airport. Currently, the company is working to build fast-charging stations at sites Fastned was awarded through that first Benefic project call in 2019 when the company secured approval for 13 highway locations in Flanders. This project involves the construction of 13 fast-charging sites along highways. The permit issued by the AWV for the 13 sites is valid for 15 years. The first two stations from that batch are scheduled to officially open this week.

Fastned was also very recently selected by the West Flemish Intercommunale (WVI) to implement five large fast-charging stations in commercial areas – predominantly on main roads in West Flanders. The two sides have now signed the first two concession agreements for stations in Roeselare and Ostend. The installations at these two sites are scheduled for completion in 2022. The other sites are to be realized over the next couple of years. Fastned plans to build one large charging station at each of the five sites with up to 300 kW, allowing up to 16 electric cars to charge at the same time.

Currently, Fastned has stations in the Netherlands, Germany, the United Kingdom and Belgium, and is about to enter the market in France. The Dutch fast-charging provider raised 150 million euros in an accelerated book-building offering as recently as February. The proceeds will be used to build the “firmly planned network of 164 additional charging stations” – currently, Fastned has 133 charging stations. In doing so, Fastned also said they wanted to accelerate the development of the potential network and “finance investment costs related to important upcoming government tenders, including in France and Germany.”