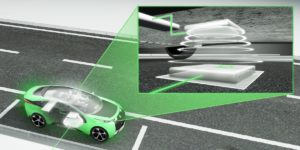 German specialist for Lithium battery storage for industry and commerce, Tesvolt, has now become a shareholder of Stercom Power Solutions, a German first mover in inductive charging. The two companies want to drive forward the wireless charging of electric cars, buses and trucks. The goal is “inductive supercharging” at 200 kW.

Tesvolt has not yet revealed further details about the exact amount of the investment and the shares. What is clear, however, is that commercialisation is planned “soon”. The company says it has found solutions to “previously unsolved questions” such as a sufficiently strong charging power and the correct parking position above the magnetic coil.

“We want to launch an inductive charging station with a charging power of 44 kW” Tesvolt’s Hannemann explains. “Stercom’s silicon carbide technology allows very efficient energy transmission with 95 per cent efficiency – even with a distance of up to 20 centimetres between the transmitter and receiver coils, something no other supplier on the market can do so far.” Tesvolt charging stations will include intelligent software that shows drivers the correct parking position above the solenoid coil.

Simon Schandert, founder and technical director of Tesvolt, has announced the next stage of development. “Our goal is to jointly bring highly efficient charging systems to the market and, in the medium term, even enable inductive supercharging with up to 200 kilowatts of charging power. This would also make charging while driving efficient in the future.”

The two companies have not said when they expect the inductive 44-kW charger or the 200-kW variant to be launched on the market and simply refer to a BMW forecast that predicts nationwide inductive charging by 2030. Tesvolt points out that inductive charging is still very much emerging technology. In Germany, the corresponding DIN standard 61980-1 “Contactless energy transfer systems for electric vehicles” is still under development, and points surrounding the billing of wireless charging processes are also open. That being said, China has set a national standard for wireless charging of electric vehicles based on technology from US company WiTricity. The inductive charging specialist has worked closely with the GB standards committee on several technical issues, including efforts for harmonisation.

Tesvolt points out that test routes with magnetic coils under the asphalt are already in place in countries like Sweden, France and Italy. Indeed, in Italy in May this year, ElectReon Wireless, announced that it will provide its technology to charge two Stellantis vehicles and an Iveco bus while driving in Brescia, Italy, as part of the Arena of the Future project. US wireless charging specialist Momentum Dynamics has already been busy with inductive charging projects for commercial vehicles for some time.  Already back in 2018, Momentum Dynamics installed their first wireless charging system for electric buses with a charging capacity of 200 kW which was used for the Link Transit company in Wenatchee, Washington. Momentum has already commercialised a 75 kW wireless charger.

Stercom founder Robert Sterff says: “We have already delivered inductive technology for international car manufacturers, and vehicles are in the test-run phase around the world,” says Sterff without giving further details of these test phases or manufacturers, which will be eagerly awaited.