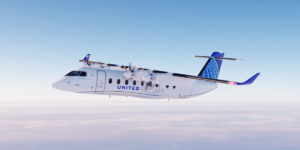 Heart Aerospace has closed a 35 million US dollar financing round. The Swedish aviation start-up is currently developing the ES-19, an electric aircraft for 19 passengers with an expected range of 400 kilometres.

Following a seed round in 2019, the now completed Series A financing round is Heart Aerospace’s first major capital inflow from external investors. The startup is receiving the fresh investment of the equivalent of almost 30 million euros from United Airlines Ventures, Mesa Air Group and Breakthrough Energy Ventures, among others. United Airlines and Mesa Airlines have also promised to purchase 100 ES-19s each – with an option for a further 100 aircraft. Back in March, Finnair, the national airline of Finland, had also expressed interest in procuring up to 20 electric aircraft of the same type for use on short-haul routes.

“I can’t imagine a stronger coalition of partners to advance our mission to electrify short-haul air travel,” expresses Anders Forslund, CEO of Heart Aerospace. “There’s BEV – the world’s most influential climate fund. There’s United – one of the world’s largest airlines, who’s poised to
be the global leader in decarbonising air travel, and there’s Mesa, the largest operator of 19-seater aircraft in history. This combination of near-term commercial viability and long-term climate investment philosophy is exactly what we need to make commercial electric air travel
a reality.”

Heart Aerospace is an aerospace startup founded in 2018 and based in Gothenburg. It emerged as a spinoff from the Elise research programme, funded by the Swedish government through the Swedish innovation agency Vinnova. In 2019, the company moved into offices and the hangar at Säve Airport in Gothenburg, and in 2020 it also received a €2.5 million grant from the European Investment Council as part of the European Green Deal.

Heart Aerospace plans to commercially launch the 19-seat ES-19 e-aircraft in 2026. The first generation of the model is expected to have a maximum range of up to 400 kilometres with “today’s lithium-ion batteries”. The range will increase as the energy density of the batteries improves, the start-up says. At the heart of the ES-19 is a proprietary e-drive system that Heart Aerospace demonstrated in its first version in 2020. It consists of an electric motor, an electric motor controller and a battery pack with integrated BMS system. The power is 400 kW, but the Swedes do not provide further details on the batteries.

Heart Aerospace is one of the founding members of the Nordic Network for Electric Aviation (NEA), which was launched in 2019. The letter of interest for the procurement of 20 electric aircraft with Finnair also came about via this network. This northern European consortium has set itself the goal of advancing the development of electric aviation. Finnair, together with the two airlines Scandinavian Airlines and Icelandair, is considered the heavyweight of the Nordic Network for Electric Aviation. The other eight founding members are Air Greenland, Avinor, Braathens Regional Airlines, El-fly, Heart Aerospace, NISA (Nordic Innovation Sustainable Aviation), RISE and Swedavia. The Nordic Innovation organisation, a body responsible for promoting cross-border trade and innovation under the so-called Nordic Council (a forum of the Nordic countries), acts as the coordinating body.