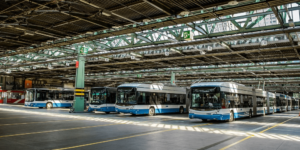 In Switzerland, Siemens has been awarded a contract by the Zurich Transport Authority (VBZ) for the supply, installation and commissioning of 45 Sicharge UC charging stations for electric buses. The charging infrastructure will be installed in the Hardau bus garage for 45 new electric buses.

Siemens says that the system is scheduled to go into operation in early 2022. The order is divided between 30 Sicharge UC stations with 100 kW and 15 stations with 150 kW. The vehicles are to be charged via CCS cable “mainly during nighttime breaks.”

With the charging stations, VBZ is preparing for the expansion of its electric bus fleet. In March, VBZ had ordered four electric articulated buses from MAN and announced at the beginning of July that the city council had approved funding for 15 more electric buses. This will be used to procure the twelve-meter solo bus version of the MAN Lion’s City – making a total of 19 electric buses as things stand, which are scheduled to enter service in 2022. However, the framework agreement with MAN also includes options to procure another 29 standard electric buses and 80 articulated electric buses.

“In order to retrofit our existing garages for eBus operation as easily as possible, it was important for us to find a charging infrastructure that offered flexible integration,” says Christoph Rütimann, vice director and head of technology at VBZ. “The charging solution from Siemens are exactly what we were looking for.”

Siemens points out a special feature of the solution for Zurich: the charging cable feed via the ceiling. “Existing garages are often not designed to be equipped with charging infrastructure, and it’s important not to disturb ongoing operations when installing the necessary equipment,” said Birgit Dargel, global head of Future Grids at Siemens Smart Infrastructure. “We will install a corresponding cable suspension system, which is also very low-maintenance compared to other common cable drums. As a result, the passageways will remain clear and entering and exiting vehicles will not be impeded”