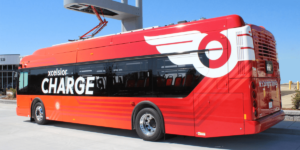 The Canadian city of Halifax will procure the first 60 electric buses, including charging infrastructure, with financial support from the provincial and national governments and plans to completely electrify its bus fleet, which currently consists of 340 diesel vehicles, by 2028 at the latest.

The tender for the first 60 e-buses will open this summer. The first battery buses will be launched in Halifax in 2023, with full delivery completed by 2024. Along with the buses, the funding will also be used to buy the necessary charging equipment and expand the transit centre to accommodate the new fleet. This also includes what the government calls “a deep energy retrofit” to achieve a net-zero standard at the depot.

In addition to Halifax, we reported several other Canadian cities planning to procure electric buses. The push is part of Canada’s plan to help transit agencies procure 5,000 zero-emission buses over the next five years. n March, the federal government announced that it would invest $2.75 billion to aid the transition as part of an eight-year, $14.9 billion investment plan unveiled by Prime Minister Justin Trudeau for public transit in March 2021.

However, the e-buses coming to Halifax see three levels of the government putting money in the pot. The funding breakdown is $45 million from the federal government, $37 million from Nova Scotia province, and nearly $30 million from Halifax Regional Municipality.

Halifax MP Andy Fillmore told reporters on-site that the federal government was committed to funding transit projects as part of the Investing in Canada Infrastructure Plan and that commitments would continue beyond 2026.

Through the Investing in Canada plan, the Government of Canada is investing more than $180 billion over twelve years in public transit projects, green infrastructure, social infrastructure, trade and transportation routes, and Canada’s rural and northern communities.

Canada wants to kill several birds with one stone with the subsidy, namely, create jobs, boost economic growth, ensure a cleaner environment and connect communities more closely. Several manufacturers of electric buses are active in the country, such as Nova Bus in Saint-Eustache, Lion Electrique in Saint-Jérôme, GreenPower in Vancouver and New Flyer in Winnipeg.

Following the above tender, Halifax has selected its supplier. The contract went to Volvo subsidiary Nova Bus. The city expects the first 30 electric buses to arrive this year, with the remaining 30 slated for service by 2023/2024. This is well within the set timeline.