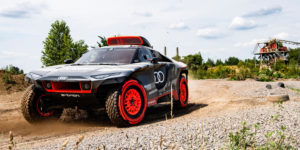 Audi Sport is now presenting the RS Q e-tron, the hybrid race car with which the manufacturer will compete in the Dakar Rally in January 2022. The drivetrain of the Audi RS Q e-tron is electric and comes from the current Formula E racing car Audi e-tron FE07.

According to Audi Sport, barely a year has passed between the first concept idea and the start of testing of the Audi RS Q e-tron. The prototype has been undergoing intensive testing since this month and will continue to do so until the end of the year – including initial test runs at cross-country rallies.

As far as the charging concept is concerned, Audi says it is taking a hitherto unique approach: “Because there are no charging opportunities in the desert, Audi has chosen an innovative charging concept: On board of the Audi RS Q e-tron, there is the highly efficient TFSI engine from the DTM. It is part of an energy converter that charges the high-voltage battery while driving,” Audi wrote. In addition, energy is recuperated during braking. The actual drivetrain is electric: A motor-generator unit (MGU) from the current Audi e-tron FE07, which was developed by Audi Sport for the 2021 season and whose torque distribution is taken over by a virtual centre differential, is fitted to both the front and rear axles. According to the developers, only minor modifications had to be made for use in the Dakar Rally.

Audi Sport also provides initial performance data: the battery weighs about 370 kilograms and has a capacity of around 50 kWh. The maximum system output of the electric drive is 500 kW, although the manufacturer has not yet finalised how much of this can be used in the Dakar Rally.

Equipped in this way, Audi wants to be “Audi wants to be the first car manufacturer to use an electrified drivetrain in combination with an efficient energy converter to compete for overall victory against conventionally-powered competitors in the world’s toughest rally”. The marathon event lasts two weeks, the daily stages are up to 800 kilometres long.

The RS Q e-tron will be entered in the Dakar Rally together with Q Motorsport. “Audi has always chosen new and bold paths in racing, but I think this is one of the most complex cars that I have ever seen,” says team boss Sven Quandt. “The electric drivetrain means that a lot of different systems have to communicate with each other. Besides reliability, which is paramount in the Dakar Rally, that’s our biggest challenge in the coming months.”

Meanwhile, the work on the RS Q e-tron is expected to spill over into Audi’s production development: “As engineers, we basically see development potential in every component. But in terms of the drivetrain system, we have already achieved a system efficiency of over 97 percent in Formula E. There’s not much more room for improvement. The situation is quite different with the battery and energy management. This is where the greatest development potential lies in electromobility in general,” estimates Stefan Dreyer, Head of Development at Audi Sport for the motorsport projects. “What we learn from the extremely challenging Dakar project will flow into future production models. As always, we are also working closely with our colleagues from road car development on this project.”

The body is completely new for improved aerodynamics. Axel Löffler, Chief Designer of the RS Q e-tron explained they were doing away with the underflow of the rear hood to the left and right of the B-pillars. “In conjunction with modified lay-ups, i.e. optimized fabric layers of the composite materials, this solution reduces weight,” he said.

New operating strategy and optimised control concepts also improve the efficiency of the electric drive, according to Audi.