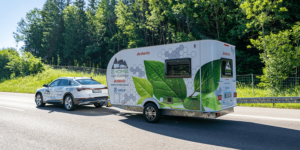 Dethleffs, the Erwin Hymer Group and ZF have set a new world record. With an Audi e-tron Sportback, they pulled a caravan over 386 kilometres without recharging – and crossed the Alps in the process.

Dethleffs had already presented the prototype of a caravan with its own electric drive in 2018, which was developed together with the Erwin Hymer Group and ZF Friedrichshafen. Now, the project partners have demonstrated the practical readiness of the concept in a challenging caravan tour across the Alps.

From Isny, the Audi e-tron Sportback pulled the electrically powered caravan E-Home Coco all the way to Lake Garda – without a charging stop. Normally, the additional weight of the trailer and especially the increased air resistance drive up the consumption of the towing vehicle (regardless of the drive technology). With the crossing of the Alps, the project partners wanted to prove that a trailer with electric drive can compensate for this higher energy consumption – and that the towing vehicle can also reach its usual range in trailer mode.

The route led from the Dethleffs factory site in Isny im Allgäu over the Fernpass road and then on the A12 and A13 motorways past Innsbruck over the Brenner Pass. In Italy, it was on the A22 via Bolzano and Trento to Riva on the northern shores of Lake Garda – a total of 386 kilometres and 4,870 metres in altitude. For this journey at an average speed of 62.4 km/h, the e-tron Sportback consumed 62 kWh of energy (i.e. 21.2 kWh/100km), the e-home Coco 74 kWh (19.2 kWh/100km).

These consumption values of the towing vehicle were made possible by the trailer’s own drive. A towing force sensor is installed in the towing device itself. This is supposed to detect whether the towing vehicle is accelerating, decelerating or rolling. This information was used to control the two electric motors of the caravan prototype. Within a tenth of a second, they regulate their drive torque and ensure that the e-tron Sportback never had to move more than 20 kilograms of towed load during the record drive – the Caravan does the rest itself with 2x 90 kW.

The E-Home Coco also has a recuperation system, which means it can recover energy during deceleration. Incidentally, the prototype has disc brakes as mechanical brakes instead of the drum brakes that are often used. The reason lies in the electric drive: disc brakes enable a more sensitive transition between electric and mechanical deceleration, says Dethleffs.

“Even though there are still hurdles to be cleared before it is ready for series production and registration – the E.Home Caravan developed by Dethleffs, the Erwin Hymer Group and ZF is already a practical and future-proof solution for environmentally conscious and economically sensible caravanning for everyone,” said Dethleffs Managing Director Alexander Leopold. “With this, Dethleffs once again lives up to its claim as a caravan pioneer.”

As the trade magazine Caravaning, which accompanied the record drive, writes, some changes are likely to be made to the series in “three or four years”. With regard to weight and costs, only one electric motor with differential could be installed per wheel instead of the previous asynchronous motor. Technically, the solution with two motors offers some advantages: With the wheel-selective control, the caravan itself can contribute to the stabilisation of the vehicle and prevent lurching. In addition, the prototype can be manoeuvred on the campsite or car park with its own drive – if both motors run in opposite directions, the prototype can even turn on the spot.